When I saw the first couple episodes of Blue Exorcist, I got the impression of a show that would be right at home on adult swim. It had flashy priests vs. demons action, decent drama, and a somewhat over-the-top plot (satan’s son on a quest for revenge against dear ol’ dad). That is pretty much how it played out, and the result was a notable, if imperfect show in one of the greatest seasons in recent memory. 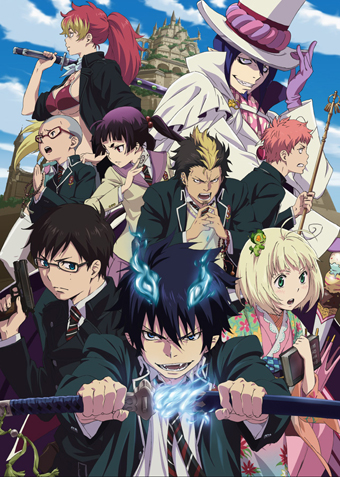 Key art always looks like this, but A-1 makes the actual show look almost as smooth

The characters in Blue Exorcist generally look their parts. Characters with demonic orgins have sinister features, gentler characters look soft, and significant amounts of battle experience is obvious in the eyes of the ones who have it.

1/1 (Character designs are fairly elaborate and capable of expressing a range of emotions.)

Blue Exorcist’s soundtrack is characteristic replacement-level stuff. It does everything a soundtrack for a battle series needs to do, delivering low-key music in low-key moments and high-tension music at high-tension moments. But it doesn’t blend into scenes so much as just compliment them; the soundtrack was directly noticible at times it should really have been helping emphasize what was happening on screen. The music itself was not exceptionally better than any number of other action-series soundtracks out there.

A show where the main character is the son of satan whose stated goal is patricide could be understood if it chose not to try hard in fleshing out its characters. Blue Exorcist did it anyway. After a strong opening building up his relationship with his crude yet loving adopted father, the script focused on building a story around Rin’s relationships with both his brother Yukio and his exorcist classmates. One of the show’s many amusing dynamics is that another member of Rin’s class shares his goal of killing satan, which becomes an odd source of comraderie between the two. Building up this cast, one unique in both skill sets and personalities, allows the show to entertain a number of varied story arcs.

One of these arcs is the final one. An arc that, as I understand, is unique to the anime. But while anime original ending do generally tend to be problematic for a number of reasons, this show manages to pull it off fairly well. Here’s why: what is required of an ending is not adherance to the source so much as just consistency. The reason so many anime original endings often fail is because their writers forget this fact. Fans, often interpret that usual failure as an inevitable one, and are reluctant to acknowledge that there are times when being selective with the source material you show can dramatically improve certain stories. I have not to this date touched the Blue Exorcist manga, so I can’t say whether the ending was inferior to what the manga chooses to do. However, I feel comfortable in saying it was a decent one. I can say that because the characters who changed changed gradually, and those characters who didn’t acted consistently with who they were throughout. There were a number of scenes from the ending that struck me as very consistent with the way the main cast had acted throughout. Without spoiling too much, the scene I always come back to features one character offering another a random choice, then secretively erasing evidence that the choice was rigged, all in the space of 30 seconds. I can’t really complain about an ending script that gelled as well as Blue Exorcist’s did.

3/3 (Characters were well-established enough to carry whatever the show did.)

Direction: Sexy action and pertinent drama, but not on a weekly basis [Tensai Okamura]

Blue Exorcist has that particular quality that one can watch a couple of minutes and immediately figure out that it is trying very hard to be an a-list title. The action scenes make for very smooth viewing. The drama takes itself seriously when such an approach is called for, and isn’t afraid to play around with camera angles. The pacing of scenes, though, is somewhat erratic. Scenes that felt like they deserved more time, mostly non-action scenes, sometimes felt rushed. Perhaps most importantly, the show never really took any of its chances to really hammer the viewer with a chain-lightning sequence; the moments of the show that were real standouts were isolated one-and-done affairs.

Also notable is the fact that, at one point, the show inserted a significant amount recap in order to compensate for the cost of one of those smooth action scenes. It may be a pet peeve of mine, but after watching shows like Kare Kano and Utena, simply replaying used footage to fill minutes you couldn’t animate seems to be the fault of a lazy director. 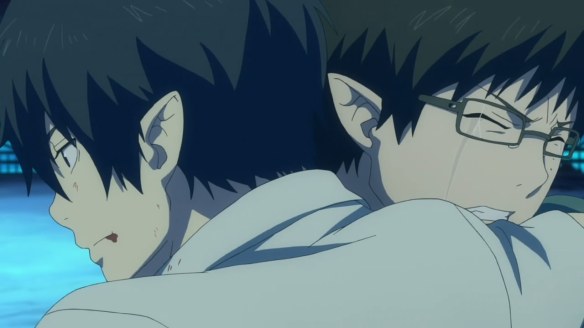 Still, not just anyone could’ve pulled off this double-face-focus hug shot

3/4 (Sometimes grabs you by the throat, but never has enough grip to keep hold.)

Was Blue Exorcist worth it? Yes. Was it a show I’ll still be talking about 10 years from now? Probably not. Still, if you’ve got an anti-demon action fix and want to see something recent with a good script backing it, it’s a pretty good pick.