Blast of Tempest is a very entertaining show, but sometimes it makes odd choices that don’t really seem consistent with how good it’s capable of being. This was, by and large, a solid episode, but also a reminder of how peaks-and-valleys the show can occasionally be.

I’m going to start talking about this week’s episode by pointing out what I feel were a pair of mistakes in Masahiro Ando’s direction, made more glaring by the fact that both could have been fixed with one change. Firstly, this episode was 90% about the interaction (for lack of a better word) between Hakaze and Aika. However, somewhere in the middle of their discussion, a scene of the future introducing what appears to be the series’ final boss was tossed in. Even if it technically fit the topic the two were discussing, it felt odd and made it seem like a bit of a waste that the show wasn’t using this parallel timeline for more than a few words of bonus narration.

Secondly, the episode ran about 40 seconds over the standard slot time, resulting in the light-hearted ending theme being played over scenes of cops cordoning off the scene of Aika’s death. Those two things had all the compatibility of the romance between Kaiji and Mikoko. While I normally approve shows that segway into the ending with a killer riff played over a cliffhanger, this scene had neither of the above components. It’s a more glaring issue because, by cutting out the aforementioned future scenes or even inserting them more efficiently, the show could have avoided this unintentionally jarring segment. They also had the option of simply choosing another track to play over the same 40 seconds, making it all the more irritating.

Literally, dead silence would have fit this scene better

Sloppy toppings aside, the core of this episode was definitely a fun experience. We finally got to see Aika outside of Yoshino and Mahiro’s memories, and while she initially came off as more bratty than in either of their recollections, it became striking both how cold she was and how much she actually cared about Yoshino (half the reason the two came to blows). The ease with which she accepts her own death, along with her aggressive desire to carry it out once she set her mind on it, speaks to a character both extremely logical and stubborn. I do have to wonder, though, if she doesn’t have chronically low self-esteem. She seemed to be defining her existence solely around Mahiro and Yoshino during her first and only internal monologue of the series, and she also made a point of how dejected and isolated being the mage of exodus made her feel. By the by, the dynamic still cuts used to deliver that monologue almost made up for the atrocious fumbling elsewhere. 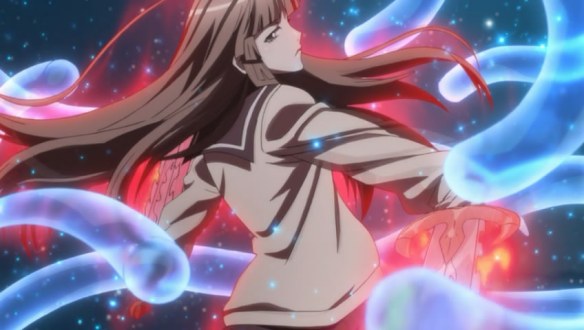 Hakaze played a less exciting role in the episode, essentially posing questions to Aika and arguing a bit with her over Yoshino, and ended up stuck resisting Aika’s own logic-driven death wish. However, in what feels an awful lot like foreshadowing, she was curbstomped despite her best intentions. To be fair, sometimes that’s just the way stable time loops go. I can only hope she fares better in her return to the present.

A final note, the Shakespeare quotes this episode did cross the line separating clever and pretentious. Aika loving to spout them is admittedly part of her character, but this was the first time watching this series that I felt like it was relying on the significance of the works it was referencing to tell the story, rather than just add background. Given that this was an Aika thing, I doubt it will continue to do so, but it did chafe this week.

3 Predictions for the Final 3 Episodes:

1. Hakaze will appear to have died in the final battle, but it’ll be an ambiguous death and she’ll be back for the epilogue.

2. Mahiro will go catatonic after he hears how Aika died.

3. Samon will facepalm at some point in the final episode.