My biggest criticism of this show as a whole is just the fact that it hasn’t been able to constantly harness its potential and occasionally throws in a long-dull skit that breaks up the action. It became a lot easier to rate after the final episode, which was one of the highest-energy ones of the show.

Endings to comedy series are a tricky business. Because it’s sometimes hard to wrap up the actual plot of a show without getting serious, it’s often just better to save up a combo barrage of jokes and start firing, as Cuticle Detective Inaba did. That sort of low-risk, high-reward approach does fine by me. I don’t feel emotionally invested in the characters’ success so much as I just like them enough to smile every time they fall over each other in failure. Therefore, pure comedy is the name of the game. 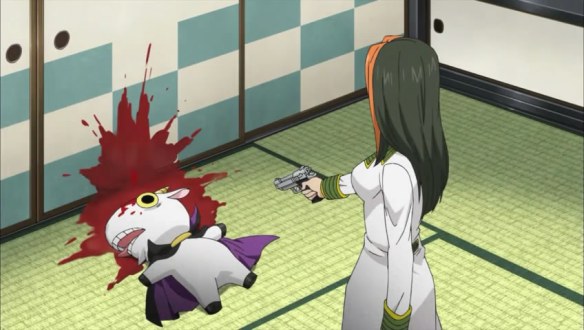 Apply directly to the forehead for best results

It was interesting to see the goat-skull wearing neet introduced in the second half interact with the main cast. It emphasized just how casual and good-natured the villains are, and even evoked some personal memories of Astro Fighter Sunred. Florsheim would totally have applicants get super-nervous during a job interview. 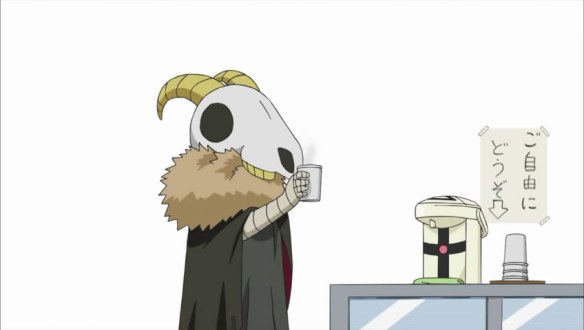 There were also a lot of spiffy small touches this episode that played up the ultimate punchlines with considerable deftness. The scene with Hiroshi in horror-stalker mode did a great job of using first-person camera and perspective swaps, a finesse that carried over to the introduction of goat-skull in the second half. It’s fair to say I’m excited for director Susumu Mitsunaka’s next work; he’s shown enough potential in just the right places over this series to make me believe he’d have a chance at whatever material he’d like to try.

Soundtrack: 1/2 (Nothing that really blends in or sticks out, but not bad music.)

Writing: 3/3 (Character and their actions almost always felt organic, and that unpredictability lent itself to superb comedy.)

Overall: 8/10 (Seriously fun, performed at a level well beyond the basic premise)