The two-week stretch of the season where every first episode comes out is almost over, so now it’s back to the equally enjoyable grind of talking about individual series in depth as they do their darndest to make an impact.

Photo Kano was a show I resolved to blog on the strength of one feature: its skillful utilization of photographic motifs to enhance a story about photography. After this episode, I’m even more convinced that rookie director Akitoshi Yokoyama knows exactly what he’s doing. This episode was all over the charts in terms of the events it featured, and he had a different camera trick for everything. And it’s worth nothing that, great as the camerawork in this episode was, it certainly wouldn’t have produced as much of an effect if the cast wasn’t growing increasingly charming.

The usage of photographic imagery this episode would have been impressive just for its variety. Motifs really ran the gamut. There was the very obvious – POV behind the camera shutter. There was the moderately obvious – the montage about 12 minutes in reflecting Shimazaki’s changing view the world after getting into photography. There was the slightly sneaky – low-angle POV in the hallway scene indicated the presence of Mr. Low-angle shot before he was ever shown on screen. That’s true of the bgm chosen for that scene as well; it was a mischevious, ominous piece that let you know something fishy was happening before it became blatantly obvious. And then there were at least two scenes of the “oh wow, this guy knows his nuts and bolts” variety – the double exposure transition during the flashback involving Misumi, and the cutaways to pictures of the same desk in two different lights after a scene transition to establish a difference in moods. Anime succeeds only in part due to things that move, and it’s been a while since I’ve seen someone have the stationary parts locked down this hard.

Moving on to more animated subjects, the show has done a fine job splitting up screentime among the female cast. By tying chance encounters and conversations with each one into a random day of Shimazaki’s life, they were able to cover a lot of different bases very quickly without seeming rushed or abrupt. Short moments of characters being themselves in an everyday setting is a pretty good way to give a feel for what characters are like, and the scenes this episode gave enough detail that I’m pretty sure I can remember all of their names now. What I appreciated even more, though, was how proactive Niimi was for a main heroine. It’s the second episode, and she’s already approaching the main character and getting involved with his artistic ventures. I’m excited by this, because the series still has 10 more episodes to go, and the sooner it gets characters grappling with themselves in solitude out of the way, the sooner it can move on to the parts where they really start bouncing off of each other. 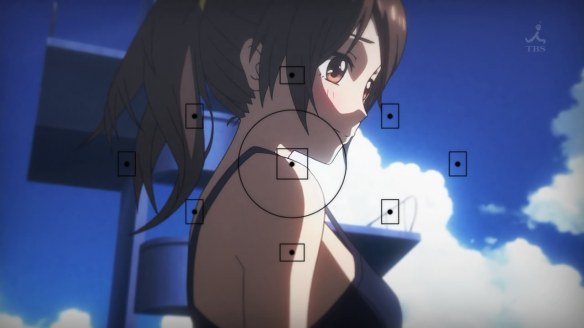 One thing that is hurting Photo Kano with me at this point is the rest of the Photography Club. In real life, they would already be disbanded over issues like harassing the gymnastics club, and the scene with Niimi early on in the episode that showed that they clearly don’t adhere to their stated protocol of asking for permission first. I respect that it’s self-aware and that Shimazaki isn’t like that, but it feels to me like an attempt to shoehorn in more cheap sex appeal. One way I could justify their existence in the show at this point is the potential for Shimazaki to defect to the Photo Club later; he seemed to have a productive technical conversation with Sunehara, he’s interested in the process of taking photos, and he has something of a nascent photographic philosophy developing. The Photography Club’s oily nature is something which stands out all the more because the scene at the end with the awkward fall, which was trying with some measure of success to avoid being overtly racy. 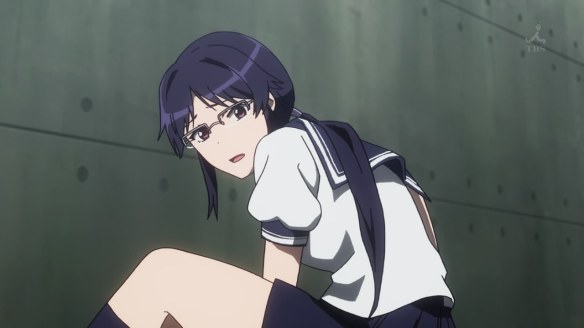 And I really do respect that effort

Based on everything I’ve seen so far, I’m very comfortable with my seat on Photo Kano’s bandwagon. It’s bringing back a 90s-style sense of direction I’m personally very fond of and doing so with panache. Even if some of the bad 90s script archetypes have come back with it, that’s still a steal of a trade.