For an episode that spent about half its time focusing on one battle scene, this week’s Devil Survivor 2 really ought to have been more interesting than it was. It’s hard to talk about the major focus of this week’s episode without using the word “anticlimax”.

I place the blame for DS2’s weak showing this week on a couple of factors. For one, the battle system in this series doesn’t have a clearly defined set of rules; characters can attack and attack and defend and attack, but I have no idea what real effect their actions are having and new powers (such as the nurse character’s drain ability) have hard-to-distinguish effects. As a result, the majority of the battle system was made up of characters throwing random attacks at the boss without really having a meaningful impact. Ten minutes of uninteresting fights while the plot stands still is a long time to not start feeling bored. Contrast with the Persona 4 anime, which had the same general issue but survived it thanks to the deliberately short fight scenes in that show. 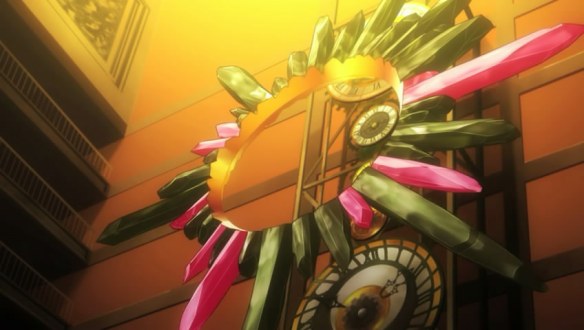 And the villains in that show weren’t speechless crystals, either

This fight specifically was dull because it didn’t use the environment the way previous battles in the series did. In episode 3, there was a general scenario to accompany the battle; save the scientist, fight off the attacking creeps, and try to prevent the death of the white-haired guy. This battle was about 10 times simpler, as the goal was simply “hit the boss until he dies”. I would be less critical of this point if the battle had taken half the time it had, but when an episode is built around a battle, it needs to be more complicated than a simple slugout. I guess the explosions were kind of pretty, but that really shouldn’t be the only selling point of a fight scene.

It’s not like the plot stayed completely stationary this episode. There was that scene at the end where Hibiki stared down down Yamato and the insurgents got surrounded by JP’s forces behind the scenes. Still, the events we got felt like small potatoes and the cliffhanger wasn’t much of one. There’s still a good half of this show to be aired, but as things stand, this is looking like the most vanilla of the shows Kishi Seiji has directed up to now. Here’s hoping that’s due to a combination of a weak script and all the work he’s putting into the upcoming Dangan Ronpa anime, something I’m still fairly excited for.