Don’t let the looks fool you, they’ve blown up more planets than you’ve lived on

Drew: I’d die for 400-year old wine. For that and various other reasons, that movie was super-cool.

Will: I really liked this movie a lot. It was really cool. There isn’t a better way to describe it, honestly. The action scenes were all great, and it was pretty consistently funny.

Drew: I guess the one thing that stood out to me was that the banter was way better planned than it needed to be for an action movie. It was incredibly witty, especially the conversations between the scientist and his oddly professional butler and the one scene where the main guy is handcuffed and in boxer shorts. It gives the thing a really good pulpy 80s feel and reminds me of the better half of dime-store science fiction I’ve read.

Sam: The entire thing can be summed up in one word: fun. The characters are fun. The visuals are fun. The story is fun. The action is fun. The movie just feels like the writers and director said to themselves, “We have this large movie budget and about an hour of screentime. How much awesomeness can we make with those?”

Will: Yeah, I really loved the characters in it. They were absolutely what held the movie together for me, and made it as great as it was. Still though, I was blown away by how cool and amazingly well done the action was towards the end. Really, the last 10-20 minutes I was just so excited, glued to the screen. I loved this movie, and I’m ready to watch it again now.

Drew: Yeah, it has that Lupin-movie quality where you could just plot people down in front of it and press the “enjoy” button. It’s got the combination of good classic characters, so it doesn’t waste a huge amount of time on buildup. And there’s comedy to break up the action, but it’s not token comedy; Dirty Pair is used to telling jokes, and some of the gags in this movie were absolutely top-shelf. Highlights include the scene where they’re hanging in a human chain from the scaffolding and the moment when Kei realizes that all their rival wants is the bottle of wine the mad scientist is saving. And the mad scientist is exactly as hammy as one should be, something that a lot of series bungle by making their mad scientists outright evil. This guy is just the right kind of all-caps Hououin Kyouma-style character. 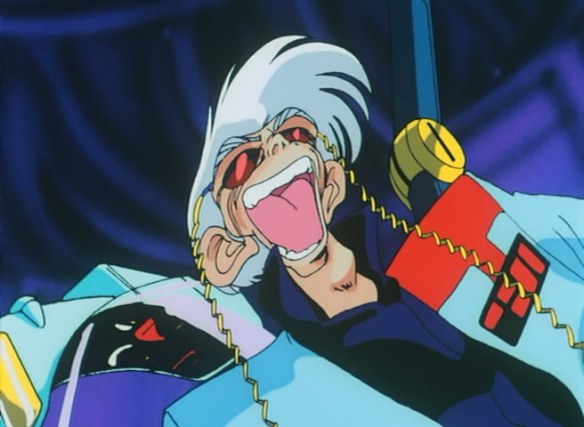 Will: My thoughts exactly. I thought Kei was great, my favorite character. Everything she did just landed right for me. I’d give it a 9, but maybe a 10 once I see it again. I really have no complaints. Almost my favorite anime movie ever, it just can’t top Redline.

Drew: I’d give the movie an 8/10. It definitely transcended the “extra-long TV episode” feel that a lot of franchise movies have and was a delight to watch every minute of the way.

Sam: I would give it a 8.5/10. It worked really well and it knew what it wanted to be: a really fun action-adventure movie with good characters and a bit of humor.

Drew: And that’s all she wrote (and he cackled). Until next time, readers!