The thing about a Kishi Seiji series is that each moment is like casting a die; it could be great or it could be garbage. This episode was a pretty good example of that principle in a nutshell, as it suddenly pulled competency out of nowhere and ended up being pretty fun to watch.

Alcor and Hibiki’s conversation at the beginning of the episode was, while at least plot-relevant, dialogue-heavy to the point of being mostly fluff. Most of the techno-babble had the same problem, as did the dinner scene at the end. In other words, the characters talked way more than they had to to get their points across. I’d be willing to bet this is a side-effect of adapting a game plot too directly, or Makoto Uezu phoning in a job. I’m pretty sure at this point a better script could be produced by a skilled editor just cutting out half the dialogue. 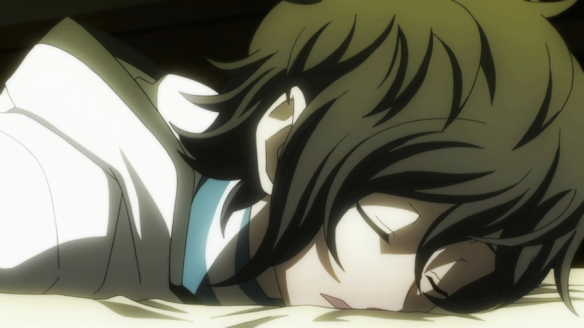 For all my complaints, I did like the moment when Hibiki was adding sugar to Alcor’s coffee. That sort of mundane thing is more fun to watch and makes Alcor a bit more intriguing as a character. It’s more the kind of thing I was expecting Kishi Seiji to pull when I heard he was directing this series. That and the little bit of comedy afterwards when Hibiki was trying to explain Alcor’s cryptic speech patterns to Daichi and Nitta. And the fact that Alcor was just casually floating during that conversation. And the weird-ass summoning conditions that made Hinako and Airi oddly relevant for this mission. Heck, I actually found this to be the funniest episode of the show thus far.

Alas, it was only a brief sweetness

As for the battle itself this week, I was fairly well impressed by three factors that set it apart from previous weeks. First, the enemy was in space and it took a good deal of JPs prep work to even reach its location. Second, it used two relatively minor characters in limelight roles, and they pulled it off quite well. Third, the show actually addressed the fact that killing this week’s boss meant sending a 50km-long massive object crashing into the city they were trying to protect. What’s more, that was an intentional sacrifice on Yamato’s part, and one that made a lot more sense than previous cases. Here, it was a straight up choice between defeat and death by orbital laser or victory and death by meteor.

Sucks to be on the bottom of that sky-oreo, though

I honestly don’t know how DS2 is going to end up when all is said and done. The middle of the show is really weak, so it’s probably not something I’ll be recommend to people I know, but if the rest of the show shows some of the cleverness present in this episode, it could still end up being a fun ride at the end of the day.