Last week’s episode was an utterly amazing display of great body language and visualism on display, coupled with some great human drama. This week’s wasn’t a big step down, as we got a lot of characterization for Serika and Sharon in addition to the titular brothers.

It’s interesting that the process of properly diagnosing ALS takes signifcantly longer than the arm-tap test. That was a nice bit of realism, adding to the sense of emotional pain coming from her. Sharon trying to write out the contact information for her sisters was a particularly painful scene to watch. Sharon facing up to the disease with a smile was a powerful image, and made a solid contrast with her expression once she learned what she had.

Mutta and Serika are indeed learning more about each other thanks to the disease. It was nice to see them sitting together and talking one-on-one for one of the first times so far in the series. Though the focus this episode was on both their characters, Serika stood out more. Her eyes and voice in particular did an excellent job throughout the episode of showing just how pained and serious she was. 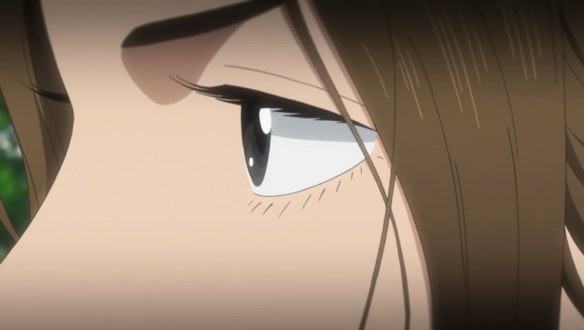 It’s kind of a given to say that this episode had consistently excellent command of body language, to the extent that it didn’t need any dialogue to build great drama. The scenes of Hibito and Mutta quietly playing guitar and hitting the books did a clutch job of illustrating the two’s unease. Ditto for Serika and Sharon’s no-dialogue scene; it was one of those really good wordless scenes where you could tell roughly the contents of the conversation, but the focus was so much on body language that they just decided to cut out the words. That, and leaving out the words there allowed Serika to reveal her own promise with Sharon in parallel to Mutta’s, bringing the two closer together.

Hibito’s encouraging words for Mutta in the car were a great little brotherly moment, and a reminder of how little real talk the two have had over the past quarter. The series really does work best when the title characters are together and have plenty to talk about.

One last comment, because I just realized the show was setting up for another October Sky homage goodness knows how far up ahead. There’s a scene in that movie where the teacher who encouraged the boys’ passions ends up in the hospital, and sees their launch from the window. Count on something similar happening when Mutta gets his rear into zero-G.