In 2011, Toei Animation and Banpresto collaborated to fund a mediocre 20-minute ONA based on an awesome trailer. In 2012, Director Rie Matsumoto returned to the fray to do it right, cranking out a new five-episode ONA. We watched the latter, and are ready to dish in the latest “us-doing-whatever-we-want” feature! 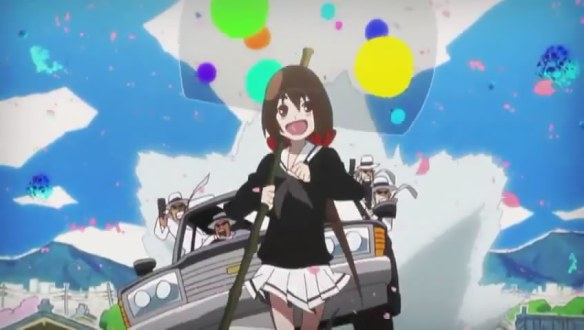 Drew: As an unabashed lover of minimalist storytelling and world-building, Kyousogiga was something I really liked. The artstyle was smooth and creative, and for a bunch of 10-minute ONAs, it did a great job of building a world and cast from nothing. It’s like a small window into a fantasy that’s somehow more satisfying than tantalizing.

Will: I’m with you there. I liked just getting bits and pieces of it. It was a nice world to visit, but I don’t know that I’d want to live there exactly. I don’t know, minimalism is really cool to me. Nice animation and art, made me think of Gainax from like 2007 or 2008.

Sam: I would actually disagree with the idea that it was satisfying; I really liked the world, the artstyle, and the characters, but I kept feeling like I was watching clips of a full series rather than vignettes designed for minimalist storytelling. It might just be the person I am, but I wished that I knew just a little bit more about the world. That being said, I still loved the show, and that’s part of why I want to see more of it.

Drew: I would like to be more of it, but I feel like it would have gotten unavoidably more generic if they made it a 20-episode show. I could see a new run of 10-episode shorts adding more depth and short stories, but it feels a lot to me like a shorter show like Muromi-san or Teekyu where an ordinary format would force it to add stuff that wasn’t really there. I do have some faith in Rie Matsumoto as a director, but there’s something to be said for keeping the format. Also, I don’t feel like it was incomplete, but that could be because I do play a good game of fill-in-the-blank when forced to.

Will: The way I see it, it simply is. I really like minimalist art, and the philosophy behind it, so this kind of storytelling is something I dig. It just is, and that’s all. I really think a longer format would force it to add a lot of things it doesn’t need, and I’m perfectly fine with it as is. As I said earlier, I like to see just parts of it, and I don’t want to know the whole story behind everything. That would ruin the magic of it for me. It’s the kind of series where things need to come out of nowhere, and not make sense. I like it much better this way. But who knows, maybe I’m looking too deep and giving it too much credit. 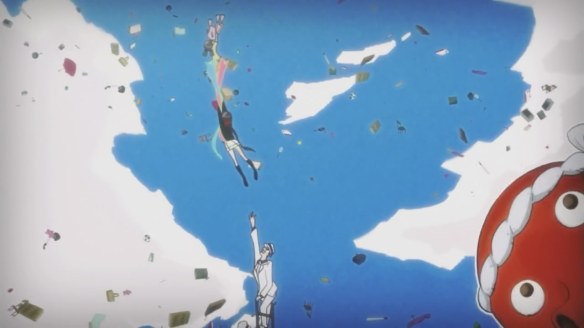 Sam: I am probably the guy who sees the forest for the trees, but I still felt like it needed a little more of a base. I don’t need everything explained, but I never felt like I had a grasp on anything. If it was a full length show, maybe it would be just more vignettes like this, or maybe it shouldn’t be, but I still kind of wish that I had a little more information. For example; I knew that Koto was different, but I never knew what it was. There was mention of a mother that came out of nowhere, there was scenes that implied that she appeared one day, but i still never quite understood anything. This wouldn’t be an issue if it wasn’t that it sometimes felt like it expected me to understand things that I hadn’t been told. I wouldn’t need everything explained, but a little more explanation here and there would give me a little more grounding. That being said, this is still a fantastic show and even as I typed that up I did see the clicks in show logic happen in my head. I just wish that it was tied together a little tighter.

Drew: I can understand the need to have more defined grounding in a story, but on the other hand, I kind of enjoy the mystery inherent in an environment that isn’t fully explained. I feel that the two offer distinctly different appeals. For example, Un-Go was a mystery show that got ragged on as a crappy mystery because most of the stories were explained in one episode. It still did things with the stories themselves, but I’ve talked with several people who didn’t like not being able to try to solve it. I think it’s that same sensation, but on a macro scale. There’s a difference between a mystery that eventually gets explicitly solved, a mystery that gets solved in the background, and a mystery that’s left open. I’d say Kyousogiga is the second type, so I’m perfectly satisfied with the background information we got, especially in the fifth episode’s musical montage. 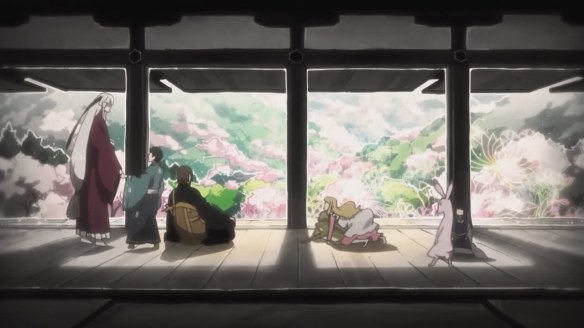 And, on a side note, the fact that the animation was as high-budget as it was is kind of impressive. This is a collab between Toei animation and a toy company which heavily sponsored things, and I guess that made the budget fairly high. If there are directors in the market willing to make 10-20-minute toy commercials and then use that budget for good entertainment, I’d love to see more stuff like this. Or Heartcatch Precure, also an artsy director using a toy-based franchise’s money to make a solid piece of work.

Sam: Kyousogiga can probably be summed up by my main complaint: it is so good that I want more content so I can understand and make the content before it even better. 8.5/10

Drew: I’m an unabashed fan of Kyousogiga’s animation, world-building, and directorial style. It’s right up my alley and does everything at a very high level. 9/10.

Will: I certainly enjoyed it for a number of reasons, but I didn’t love it. Just wasn’t feeling it. Maybe that kind of animation just isn’t my style anymore, or it at least isn’t enough to carry it. It was a nice trip, but I’m glad to be back. Strong 7, maybe an 8.

Drew: Alright, thanks to everyone who read. We’ll be back with more (on other series) at a later date.