I’m going to belabor this point, but Touch is an amazing, timeless classic manga. It’s also wildly unpopular in the states, something I kind of knew, but became much, much more obvious in my marathon sessions this week. Something I did not expect happened, and I had in no way been spoiled on it. The impressive thing isn’t so much that it happened, but how Adachi Mitsuru gives the audience the inside scoop. Suffice the man is a genius who’s madder than he lets on.

Warning: This article spoils a somewhat important twist in a manga that’s 20+ years old, but one that’s virtually unknown to western audiences. If you don’t want to be spoiled, don’t read this and do read the manga.

As you may know, Touch is the story of a relationship between twin brothers, Tatsuya and Katsuya. The older Tatsuya begins as an underachieving clown, but eventually joins the boxing team and starts to make use of his significant natural talent. The younger Katsuya has always been an overachiever, and has in chapters prior brought Meisei High’s baseball team within one win of Koushien with pitching that’s nothing short of professional. The undisputed ace of his team, he’s replaced the team’s previous pitcher, Kuroki, with Kuroki’s consent.

So it’s somewhat surprising for the crowd cheering at the final match when the starting lineup is announced, and it turns out Kuroki is the starting pitcher. Their bamboozled reactions are very typical of Adachi Mitsuru, who rarely leans on popping eyes or other super-obvious bits of acting: 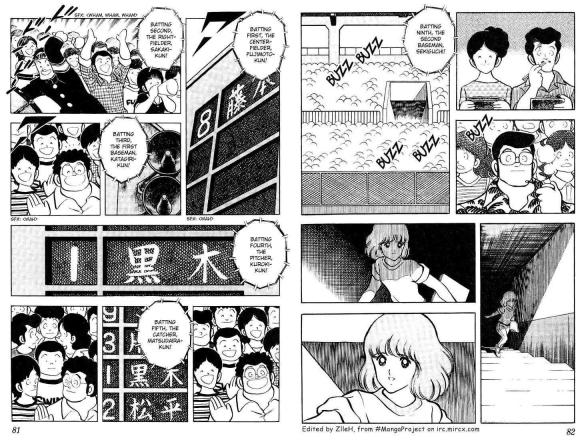 Also surprised is Minami, manager of the baseball team and the brothers’ love interest/childhood friend. It’s downright unheard of for the diligent Katsuya to miss a game at all, let alone without warning. Too, it’s unusual for Tatsuya to be absent from the stands. She asks the twins’ parents where the twins are, and they have no idea. Transition to Tatsuya watching the game on TV… 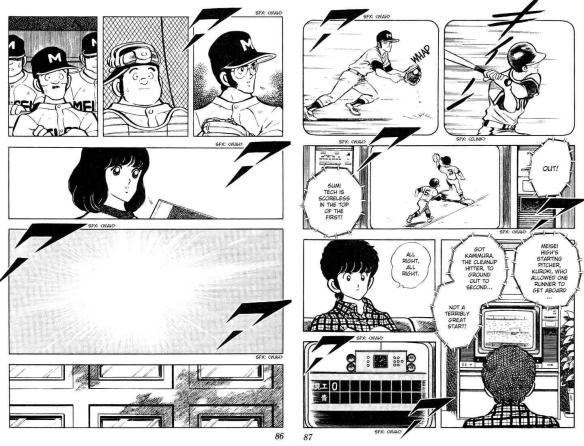 After a few more pages of baseball action, we get a shot of the building Tatsuya is in. It’s a hospital. And that sense of dread that was lurking around in the shadows since the moment we learned Katsuya wasn’t the pitcher suddenly takes on a definite, immediate form. It only gets worse when a surgeon in scrubs and operating gear walks in and calls Tatsuya’s name. That’s where the chapter ends. 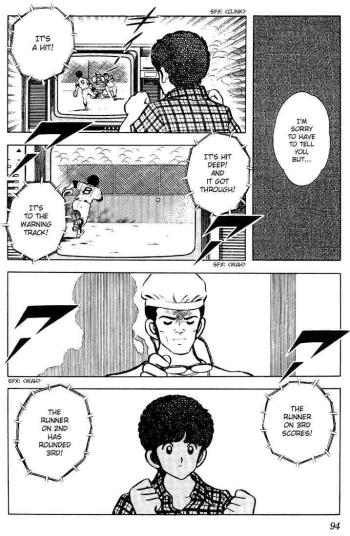 There’s a fine art to writing a character death to make it really, truly sad. It’s like having a loss in sports that’s truly heartbreaking; if you’ve got too much reason to be pessimistic and none to be optimistic, it’s unlikely you’ll be hard hit by it. It’s like the difference between watching the perpetually pathetic Charlotte Bobcats lose in the regular season and the 2010 NFC Championship for Vikings fans, where a team that had yet to win a championship came *this* close before one bad throw ruined their chances in a tie game. That’s also why I’m very skeptical of anything people declare yields “guaranteed tears” for anyone watching. I can read the writing on the wall when it’s there. If you really want to drop a brick of sadness, you’ve gotta make sure people on the sidewalk aren’t walking slowly and craning their necks. By that standard, Katsuya’s death is one of the saddest I’ve ever read. I’m only a third of the way through Touch, and it’s already my third or fourth favorite baseball manga.* The classics are the classics for a reason.

*Ace of the Diamond has better baseball, One Outs is One Outs, not sure whether I like this more or less than Cross Game (another series where Mitsuru plays with the viewers like the asshole genius he is).

3 thoughts on “Manga Chapter of the Week: Touch Chapter 64 (The Pitcher, Kuroki-kun)”