Sam: So this might just be my favorite of the season so far, of what little I have watched. I went in expecting little, but the way that the airsoft battles are staged are everything that I have ever wanted in these kinds of things: interesting, varied, and awesome. So far I haven’t been liking the drama though. It brought up the idea that Yukochan is lonely and wants friends, but the way that it presents it makes me feel less like the group is destined friends and more like Yukochan is slightly emotionally damaged and C3-bu is just there at the right time. Still, when the airsoft battles start, everything just clicks.

Will: I’m really enjoying this show so far. This is one of my favorite of the season, maybe after Gatchaman and Monogatari S2. The airsoft battle are cool, and I don’t even usually like that kind of thing. Though, the soundtrack for those continues to rock. That’s some really good jazz, I dig it. These characters are all real cool too, I honestly can’t wait for the next episode, to see more of them and their personalities. I didn’t even really notice the drama in this episode, though to be fair, I may have been distracted and doing something else then. So far, I love this. Almost everything is there.

Drew: I feel like this show has 3 major strengths, the complexity and strategy of the battle sequences, the characters being their cute, funny selves, and the jazz. The drama, like Sam mentioned, hasn’t really been a selling point. It hasn’t been around long enough to be a problem fortunately. I keep wanting to use smooth jazz to describe the soundtrack (it’s such a fun combination of two words), but I know that’s not right. Will, what’s the actual term that describes this music?

Will: Well, To be perfectly honest, I’m a bit new to really diving into jazz myself, and have yet to really become familiar with the different genres, but it definitely is not smooth jazz. I don’t know, that soundtrack has become a major selling point for me and I’m really liking it. That’s what really makes the airsoft scenes go from decent to really cool.

Drew: I think the ost definitely helps it along, but I don’t think this would be that much worse of a show silent. I’m huge fan of Law of Ueki, Hunter x Hunter, and other shows that do rule-based multilayered fight scenes. These characters may not have any superpowers beyond the fact that the animators are kind of ignoring physics when they jump, but the battles are written in an absolutely top notch manner, using environment and rulesets in maximally creative ways. It helps that the main club has seemingly acres of facilities despite being only 5 members, but that’s a minor concern. I think the main reason we like it may be different for all of us. Which is cool, means the show is a broad tent that a lot of types can mingle under. 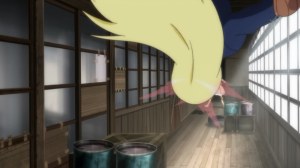 Sam: I think that the big reason I love this show is the airsoft battles. I’ve played paintball a few times, and the mix of adrenaline and tactics makes for a lot of fun. Not only that, but I’ve always been the kind of guy who loves mini golf because of how interesting and varied the courses are. This show is doing a great job of mixing those two while also making some fun jokes and using it to let the characters shine.

Drew: I am definitely not outdoorsy enough for actual paintball, sadly. But it does seem like the kind of thing that could be fun to watch done by competent people. I felt like this episode was better than the first one, but Sam’s the one who just marathoned both episodes of this show; did you feel like anything was really different about the second one?

Sam: Yeah, it was a little more large: larger cast, larger emotions, larger mission. I think I prefered the first episode, because it had the best joke so far (MITCHELL) and it had the better mission, but thats asking which child is better, and I think that now that Yukopyon has joined, it’ll become more focused and focus on the missions more and get rid of the worse parts of the drama. Also, that final part of the next episode PV made me almost cry with joy.

Will: This show is great and I can only see it getting better. The girls are cute, the action is cool, the music is way cool. I’m looking forward to that next episode too, and every episode after that.