Chihiro coming back as an AI was certainly unexpected. Said AI seemed nice enough, though you can never tell with this show. More interesting than either the revelation of the AI’s existence or the fact that it was doing research to find the party responsible for the events of the show was the way characters ended up fighting over him. It makes a certain degree of sense, given Ishimaru’s pretty unstable right now and Yamada’s just like that, but it still feels like a rather silly thing for a major plot point. I guess I would have rather seen the characters just hanging out a bit more ala episode 4 over whatever this was:

The one scene that I thought really stood out this episode wasn’t about the AI. It was that one scene about halfway through where Hagakure cozied up to Naegi and created a hole in the security camera coverage. I thought that showed a lot of down-to-earth guile, the type of thing the kids will need to ultimately break out of there. 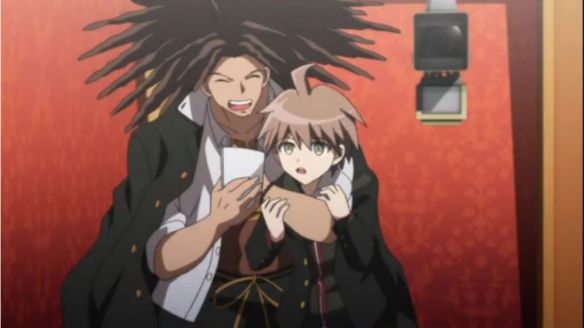 So the bi-weekly murder happened, and this time it’s a double surrounded by a very complex sequence of events. The two big suspects this time, in my book, are Aoi and Celestia, the two who were left alone with Yamada’s corpse (the live one) with unverifiable alibis. Yamada’s dying declaration that it was Hagakure was just too easy, to the extent that it really can’t be him. Likewise, Naegi, Togami, Sakura, and Fukawa were in a large group, and Kyouko was with one for one of the murders. Of the two I’d give the edge to Celestia because she’s a high-stakes gambler by trade and Monokuma just tossed a huge pile of money in as a bonus for the murderer. Considering what’s already at stake for everyone, tossing in a pile of money seems like a really marginal thing to do unless you’re hinting towards someone obsessed with it. Nonetheless, it was a really complicated sequence of events that led to the deaths this time around, so there’s a few different ways this could shake out.