Free didn’t let up on the details as per usual. It might be only the second or third time I’ve seen an anime point out the poor quality of it’s written Engrish, a stickem take on a cliche that was further justified by it being written by a bunch of jock high schoolers. It packed in a little extra bit of realism by showing how information technology can be used to boost athletic performances. And it made the most of a nabe spill, resolving the subplot foremost in the minds of the viewers. 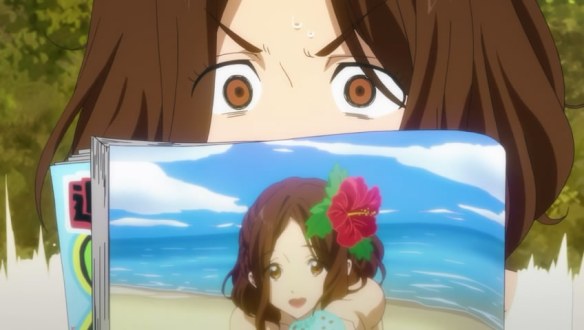 If I were her, I would have just picked up some non-corrective glasses

But the real reason Free sold out at the majority of online retailers is that it packs a good dramatic cast, and said cast was on display as well, approaching something that the show hadn’t really confronted up till now. The central arc of the show deals with the rivalry between Rin and Haru with roots dating back to when they were in the same swim club with Matoto and Nagisa. So where does Rei, the new kid who’s now friends with the latter three but just got involved 3 months ago fit into the equation?

9 plugged Rei into the Rin-Haru dynamic in a funny way. This ep showed a bit of the issue with carrying along long-term baggage; people get dragged in who have no idea what’s going on. When drama carries on past whatever generation started it, there’s a choice between forcing the new guy into it and letting him feel left out that nobody wants to have to face. The group explaining things to Rei did give the audience an opportunity to get a clearer view of the relationship as well (and the flashback at the beginning said a lot about Rin’s initial friendship with the three), but the effect it had on Rei was what ended up pushing the story forward. After that final scene that ended with Rei and Rin in a banchou-style staredown, I fully expect fireworks of some type

I’m hoping that whatever Rei ends up confronting Rin with brings a similar answer to Haru’s earlier in the episode; that their confrontation was no longer a dreaded grudgematch, but a rivalry of which he was eagerly anticipating the next installment of. Whether it is or not will set the stakes for the regional matchup.