Arpeggio continued to impress this week by folding in some well-placed imagery and bringing along a Greek chorus to the battlefield. It’s the first TV anime I’ve seen in a while that really feels like it’s bringing the best aspects of anime movies to the table. And it’s doing it while continuing to post legitimate heat-check tier numbers in the marketplace.* The 3D still isn’t 100% perfect**, but things that were kinks even as recent as last episode were ironed out, and the sense of spectacle is exactly where it’s been. 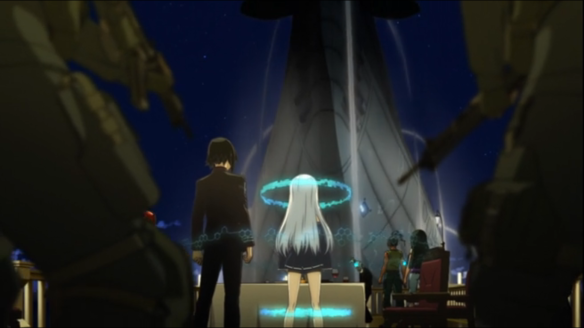 Script-wise, this show stands out a lot more for the macro themes than the micro dialogue. It’s not like the characters aren’t fun to watch; Kyohei and Sou both come off as very distinct personalities, if somewhat generic, despite their lack of screentime. It’s more that the plot is sci-fi/military in nature and thus necessitates some more reflective elements of the plot, which have been handled nicely. To wit, it’s very easy to come off as hackneyed when you’re putting an emotionless avatar girl into a war memorial. But through some combination of the detailed sunset lighting and the subtlety of the changing expressions as Chihaya and Iona talked over aspects of human psychology, the scene managed to be very engaging. Color me satisfied with what was very much an interlude/buildup episode.

Of course, there’s the obvious teaser of a two-ship non-stealth battle coming up in the near future. Which should be more interesting as the crew no longer has a wave-motion gun to rely on. The tactics in the upcoming fight might be a bit of an unknown, but there’s not a lot of x-factor for the show at this point. It represents a rock-solid piece of vintage-esque sci-fi, as well as a passing point for the art choices it’s made.

Compared to last week, Arpeggio moved up a spot. That’s after 2 probable 10k hits entered the mix. In all likelihood, it passes BlazBlue and it’s slow-ass growth curve handily by next week, and there’s a good chance it could fight out WA2 for the #5 spot (though anything more than that is a hard no). If that happens, Sanzigen’s getting paid, Kishi’s getting paid, and the whole “CG anime has no future” drivel that some peddlers are pushing becomes even more hockey. Techniques will only get better, and the market is already here. I’m just hoping it leads to a late-night style quantity increase (mo’ marginal series, mo’ fun).

**Brief point about Tokyo Ravens: while I was super-excited by the first episode and the adrenaline-pumping OP, it’s just running a clinic on how not to do 3D action. Basically the polar opposite of this show. When a show’s outlook is looking south, visuals are typically the first clue. I’m probably going to pick up WA2 (currently beating out Arpeggio and Kuroko’s Basketball as my favorite this season) or just take the time to do more number crunching.