One of the fun things of reading a manga or watching an anime that didn’t start out with a rock-solid grasp of its own identity is the sometimes-futile-but-always-amusing attempts to meld a bunch of disparate elements together into something that feels like a complete product. Maybe it’s just that I prefer mixed genre shows to pure cases of one element, but I, at least, gravitate towards shows that have that organic feel. It’s one of the reasons I like mid-tier monthly manga so much; between their loud, energetic character types and their solid+ grasp of visual techniques, they hold a little more intrinsic cohesion than the field. Put another way, you can mix vastly disparate genres provided your characters are amusing and your visual acumen is there. 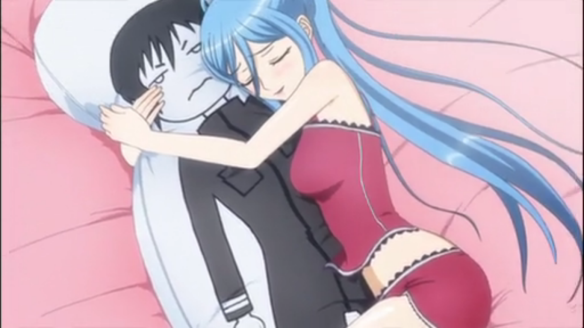 And this was the week Arpeggio really flashed its chops in that regard. Already having solidly established the show in the naval combat department, the Kishi/Uezu team really embraced the harem comedy components of the show this week, and the result was pretty much up to their track record, an effective combination of character-centric gags that cleared the air after last week’ darker dramatic turn.

Takao’s newfound, somewhat unhealthy fascination with getting one particular human to captain her was something that had been building up for a month, but the hilarity of her almost-confession was accentuated heavily by the addition of a second crazy A.I., this one with a similar level of interest in Iona. The scene where she and Hyuga attempted to peel Iona and Gunzou away from each other was quite lively, largely thanks to the latter’s mile-a-minute personality. So far I have yet to see the series add a cast member who doesn’t add to the potential for witty banter.

There were still dramatic components of the episode, chief among them Haruna formally cutting off ties with the fog in favor of Makie.* That was a scene that did what it had to, drawing a clear set of battle lines for the upcoming confrontation between Gunzou’s now 2-vessel fleet and what looks to be something on the order of 10 battleships. Watching how the crew handles its new bounty of strategic resources in what is at least a 5:1 odds battle figures to be prime-time viewing.

*Side note: actually addressing the thing with Makie’s meds was respectably thorough writing. How a girl who needs a nightly cocktail of drugs to survive was going to last the day bothered me after last week made it clear she was going on the lamb, so props to the script for covering it.