Daimidaler was split between pervy humor that felt fresh and organic (the uniform scene at the beginning, everything penguin-related) and stock pervy humor. While there was enough of the latter that I certainly wouldn’t be watching it in a group, I felt like the former made a stronger impact. Between the comedy and the wicked hot-blooded/punny intro, I’m happy to see where it goes on a week-to-week basis.

Mahouka’s intro wasn’t exactly explosive, as it seemed mainly to serve the purpose of introducing the basic setting and developing some chemistry between what seem to be the 5 main cast members. That shaolin training in the middle was all-that, though, and I expect more of the same from it later, given the plentiful opportunities offered up by an aggressively discriminatory squad of upperclassmen. I’m willing to give the plot at-large 2 more episodes to develop, as the show seems primed to deliver on the action and visual effects. 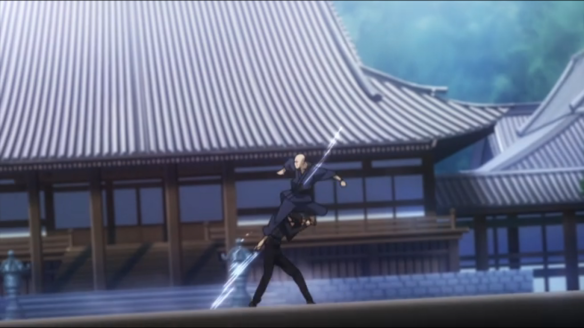 Soredemo Sekai wa Utsukushii’s opener had a bit of a fairy-tail feel to it, what with the fantasy setting and the grandmotherly narration, and did a nice job of advancing that setting through a bunch of small conversations. Too, it’s fun to see a level-headed, world-wise, nice type who can banter her way around the block slotted in as the female lead. She carried the episode splendidly, and I’m totally down giving a show featuring her handling local politics three more weeks to establish a solid rhythm.