Along with an understanding of the broader context of the subject, the most vital ingredient to good anime coverage is a reliable source. So when US journalists actually interview people on the production side in Japan, it’s generally worth noting unless the interview consists entirely of fluff. This is the latest of what will hopefully be a couple more posts archiving articles from Newtype USA’s [inside] series of articles written by Amos Wong. This one talks about what-if superstar studio gonzo, years before bankruptcy filings forced their biggest talents to split off into David Production and Studio Sanzigen.

Note: Pictures are scans of the article made on my crappy scanner, which cover the article text but not the entire page. They’re also in greyscale, because I’m interested in archiving interview text and color scans make the process more of a headache than it needs to be. Apologies for that. Scans after the jump, along with comments on the contents of the article. 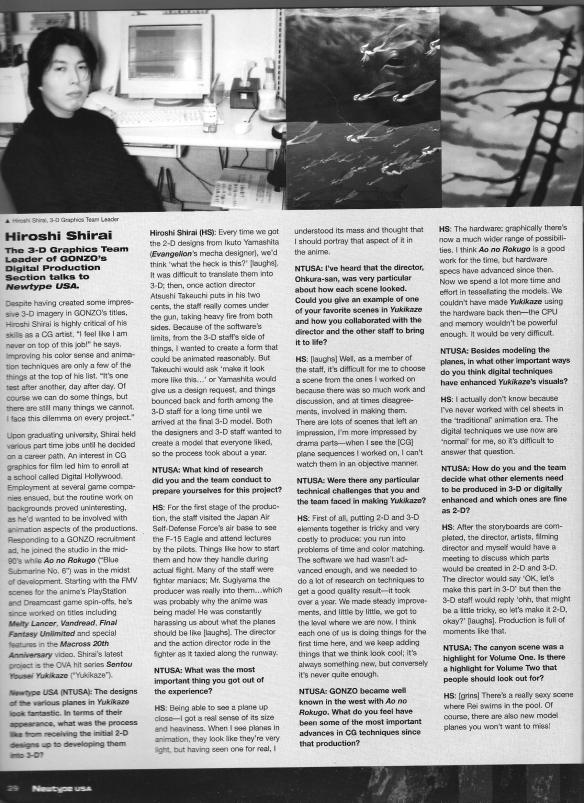 -I find it extremely fun that gonzo was almost called “Handsome Tower” or “Happy Kogyo”, and probably would be if the people doing the naming had cared what the dictionary definition of the term was. I played some word replacement games with their ann headlines, and the different names do lend them a different feel.

-Shoji Murakami mentions that there was a gap between being unemployed after his work at Gainax before establishing gonzo at the prompting of those around him. That would indicate a different set of formation circumstances than Trigger, which, if I recall, had its chief members leaving Gainax directly to found the studio.

-Interestingly, a lot of gonzo’s early hiring seems to have been done in a somewhat nontraditional fashion. Maeda Mahiro and Shinji Higuchi were both working on Gamera-franchise movies, and their hiring policy of trying to avoid people with old-industry connections in their hiring. It does sound like they ran a pretty decentralized operation.

-It’s interesting that a series about submarines is mentioned as “the first anime to rely so heavily on 3-D CG, yet also turn a profit”. Fairly similar to Arpeggio – it wasn’t the first all-CG anime, but it was the first of its kind to put up the kind of numbers it did.

-Murakami mentions the majority of recent works as some kind of revolutionary, but that actually makes sense to me. We’re talking about being right smack in the middle of the digital boom, so technology and the skills to use it may have been advancing rapidly enough that each work was significantly more advanced.

-Gonzo was apparently very nocturnal. The Manabu Ishikawa portion starting on page 7 mentions people typically get into work at 4-5pm and leave when the sun rises. It’d be fun to see a graph of studios ranked by percentage of employees who work nights versus work days.

-Also from page 7, the studio’s staff seems to be between 70-90 people, depending on budget and production phase. Adding that to info from some of the other studio interviews, it might be ok to think of ~100 people as a typical studio staff size in the early 2000s.

-This edition’s research trip was to an airforce base to see and ride the planes (or, at least, the director rode one while it was on the runway). It’s a sensible step for an anime focused around drawing planes in detail, though stuff like “# of technical mistakes avoided thanks to research” is difficult to quantify (that know-how is probably one of many skills producers get paid for). Also, you can tell gonzo’s not a huge budget studio, because this was a domestic research trip.

-I love how Hiroshi Shirai paraphrases the 3-D division’s reaction to difficult requests from the director. Nice and colloquial.