I like the characters of Arata Kangatari a lot more than I probably should. If I had to say why, it’s how believable they are. Arata, especially, but Kotoha’s had her moments. Too, the cast is adding members in this prison arc, hinting at their futures (or lack thereof) in all the right ways.

The show does contain a lot of unique, refreshing aspects, but there’s a fair amount of generic bits as well. There’s the fact that the protagonist is in a super-desolate prison, which no one has ever escaped. The fact that said prison eats people every day makes me wonder about how often blimps deliver prisoners, as it’d get empty pretty fast with the population this episode showed. Meanwhile, Arata represents a matchup nightmare for the warden, being also a Hayawhatzits wielder and the main character of the show. And the prison is filled with a few characters with detailed designs, plus a bunch of generic mob-thinking thugs, who are easy to distinguish.

Arata himself acts very much like I would expect someone thrown into a killer jail on an alternate earth while being expected to save the world in the meanwhile. That is to say, he oscillates between shaky feelings of duty and a bedrock-imprinted lack of confidence at the smallest stimulus. He’s also surprised by the smallest of things; his plunging the magic sword in and out of his body was a clever little bit. I like watching a character who’s stringing it together moment-to-moment, as it adds a degree of tension to the story.

Kotoha, meanwhile, is providing Arata with a pillar of support that’s doomed to vanish at some point. I don’t mean she’s set up on a death flag march, but that she’s a lot more emotionally stable on the outside than on the inside. Remember, she still believes that Arata from Japan is her Arata with amnesia, and when a character rests their case on a willful misunderstanding of events, it’s more often than not a house of cards that’s bound to come crashing down. Fortunately, for now, her loyalty is one of the few things keeping Arata from falling off his own personal mental cliff. Which he nearly did once he was kidnapped. 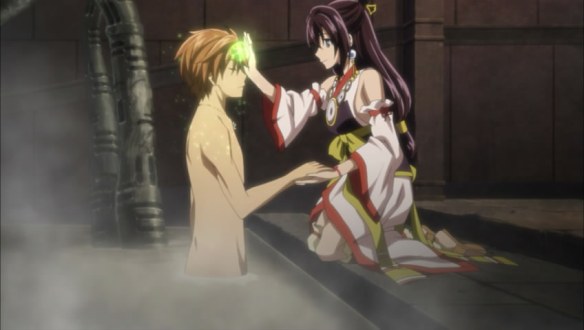 A lot of how this show turns out will hinge on whether it handles the rest of the cast, especially those who were introduced this week, with the same proficiency. I feel justified in placing my expectations reasonably high at present, as the show certainly did a suave job of placing a Valvrave-tier death flag drop/tease in with Ginji and Kanate at the end. I’m only fifty percent sure they’re actually dead, but killing them off this early shows considerable ambition from the script.