I was worried about whether this show was going to fall off a cliff by resorting to cheap boob humor and forgetting to be actually funny. Fortunately, Muromi-san showed itself to be made of sterner stuff.

Muromi-san’s approach to its first couple of episodes has been fairly similar to that of another show this season: Mushibugyo. Though the two have different genres and art styles, they’ve both spent their first five episodes introducing one new character a week. The difference is that Mushibugyo is linking token backstory with a substandard monster-of-the-week plot, whereas Muromi-san is tailoring the set of skits it runs each week to the dynamics each new character brings to the show. I was expecting this episode to be much worse than it was because the character it was introducing had distinctively huge boobs, but the creators got around that pit trap by naming her after a certain Lupin III heroine and making the story about her irrational prejudices. This show has definitely found its groove via petty anger plots. 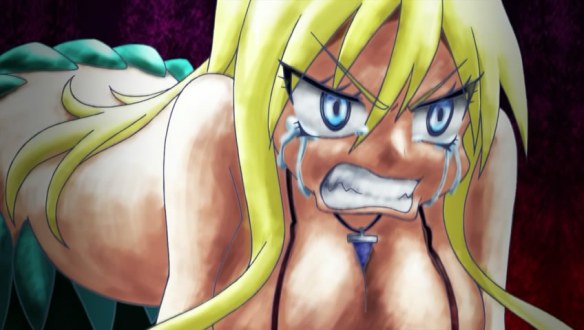 And obligatory faces of rage

Meanwhile, Takuro is starting to worm his way into that tier of extremely self-aware and unique straight men that includes Captain Kraft from Level E and Shinpachi from Gintama. Slapstick can get old if you’re just doing the same thing, so a male lead who starts running simulations to avoid getting punched is someone worth watching. And as always, I loved the little details this week, like how the slap-simulation bits were almost exactly the same except for the hand (alternatively closed and in a fist).

Too, the kid can definitely run

Based on the number of characters in the opening, we’ve probably got 2-3 more weeks of cast-introduction episodes in the pipeline. But so long as they’re as selfish and playful as everyone so far has been, I’m totally chill with that.