Welcome to the latest installment of the column where we, the Animetics crew, trade lowbrow thoughts on stuff we just finished! In this installment, we discuss the 2013 Tokyo Anime Fair Best Animation Winner, Mamoru Hosoda’s Wolf Children, and the many ways it disappointed us. 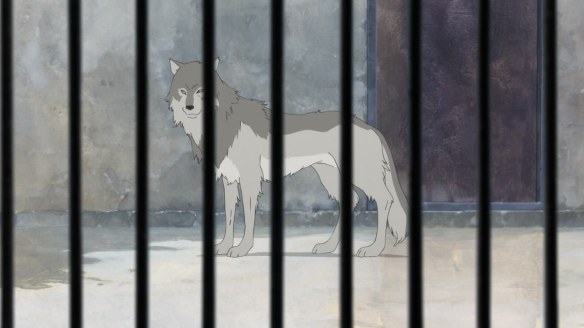 For one, it focused far too heavily on this element rather than a more solid core story

Drew: I’m just gonna start us off by saying that, being the one who originally suggested this movie, that it felt like basic mistakes the movie. The beginning was pretentious and didn’t know how to use animation budget, there were times when the animation was just jerky, the story felt like something that would have been better if the main element (wolves) were removed entirely, and it felt dead-set on its own conflicts without really paying attention to aspects that could have been interesting. And it took two hours to hit an ending that was obvious in a tenth that time. Underwhelmed would be an understatement.

Will: Yeah, what Drew said. To be fair, it’s a premise I kind of hate, but I was going in with high expectations. I didn’t really know what the movie would end up being like or about, but that was just awful. It felt like Grave of the Fireflies to me, in that it was supposed to be sad or something, but I felt nothing for any of the characters, the ending was obvious, and I really just wanted it to end so badly. It felt like it dragged on forever, but that’s nothing new for how I feel about anime movies. I really didn’t like this film. Nothing went right for me, except for the backgrounds looking very nice. The characters really didn’t seem to mesh with them though. I’m just so done with this.

Drew: It’s the kind of movie where I feel there was a decent plot lurking in there somewhere, but it got so caught up in the “kids are werewolves” themes that it forgot to really focus on a mom raising children and got no message across, if it had one it was going for. I contrast it with Usagi Drop, which needed nothing supernatural and ran the same story in a bunch of 20-minute episodes with much less of a budget. Also, the tragedy was a very forced thing; the dad’s death came out of nowhere and Ame leaning into his wolf side came off as an edgy bishonen darkside plot that many, many battle series have done to death.

Sam: Lets talk about the Ame wolf side ending for a little bit, because that is what really pushed this movie over the edge for me. One, for a movie about family and its importance, Ame running off really destroys the family togetherness for everybody. From Yuki’s perspective, Ame just ran away while she was at school one day; From Hana’s perspective, her son ran away forever, barely saying goodbye as he left, and from Ame’s perspective, his family is gone and he will never see them again. Two, it came out of nowhere. The issues with humans was a brief scene, and the fox was introduced about 20 minutes before the climax, meaning that one of the biggest decisions in the movie had almost no buildup, foreshadowing, or even support, due to the short run time of Ame’s storyline. Third, why does he need to do this? Why is it SO important to take over the fox’s hunting grounds? If he really wants to keep in touch with his wolf side, why not just help with the nature preserve for his job, or at the very least not abandon his family forever AT THE AGE OF 10.

Drew: Yeah, that was one of the aspects that pushed the writing into the zero-points column for me was how forced the tragedy was, and how little else there was. The happy ending was anachronous, rather than something that felt like something the characters earned. Most of my favorite drama series do something to mix up its tragedy in everyday to make it feel real. Hajime no Ippo is perhaps the best example, where tragedy (like a sick mother or unemployment) happens in the context of a character’s whole life, and thus actually kicks like a stallion when it finally happens. Here, they were always aiming for the same place, so I had my guard up and anything it did (even without the inconsistent characterization) would have minimal emotional impact.

Sam: The other problem with this movie is that it was very textbook. The entire thing felt like it was TRYING to be as sad as possible, TRYING to be as tragic as possible. The dad’s death was unexplained and made us watch his body go into the garbage truck as his grieving widow and children watched on, which felt like it was trying to twist the knife just to twist the knife. I could tell the ending by the 20 minute mark, and knew almost every part of the movie before it happened because I had seen this story before; Unique individuals have to hide their uniqueness from society because otherwise there will be trouble, lots of little trials, choice between uniqueness and society. It followed that formula to a T and so I had little to do during the movie.

Will: I agree completely with all of this. My major issues with it were simple: it all felt really forced, and the pacing was just awful. I say this a lot outside of the blog, but I really can’t sit through anime movies. Most of them just have really terrible pacing, and I’m constantly checking the time, or surprised at how little has gone by. Even Castle of Cagliostro, which I love, seems to drag on, and I always feel like it’s longer than it is, or I remember it being.

Drew: Yeah, I feel like it was going for a low-energy approach too often in a drama that needed high energy. It’s not the same thing as slow pacing; time in the movie passed fairly fast. But the characters felt like they didn’t have another gear in their personalities, like their emotions were developing slower than molten lead. I feel like the movie reeked of a problem I’ve written about before, where having big, fat budgets causes directors to automatically choose the most expensive thing (in this case, a focus on slow, fully-animated body language), even if that doesn’t work for the story they’re trying to tell.

Will: Yeah, to have a proper tragedy, to me it needs a drop in mood, something sudden, but this movie failed that. Not as bad as Grave of the Fireflies, which was a long downward slope to  foregone conclusion, but I feel that Wolf Children was very much the same. There needs to be some high energy so that low energy actually feels like something. High energy and low energy can both be done well. Grave of the Fireflies is low energy done poorly, where it lacks the impact, because there is no high energy. Hidamari Sketch is low energy done well, on the other hand. For high energy, I see Violence Jack and Redline as bad and good examples respectively, for reasons that are very obvious if you’ve seen them. Anyway, Wolf Children was really bad, and I’ve got nothing else to say about it without getting (much more) general and off-topic. 2 or 3/10

Drew: Yeah, I think we’re about ready to open the pandora’s box and give out scores. I liked the character designs and thought the direction was good in parts, but felt absolutely nothing but disdain for the sound direction and writing in this movie. 3/10. I may be in the minority mass-wise, but I just didn’t get anything out of this movie and thought it showed some serious rookie-level mistakes.

Sam: From a purely mechanical perspective, it gets a 6/10; the animation is great but never feels like it serves the plot when it is at its best, and the writing gets the plot to places, albeit poorly. From a reviewer perspective, i.e. the recommendation score, 4/10. I WANTED to like this movie, and I still love the sequences with the wolves running, but the writing was terrible.

Drew: Well, that’s where we stand. I believe I can predict how people will react, but, as always, we welcome discussion and we’re willing to take your comments.

See you next time!