I took some time recently to look at my favorite anime and suss out a top 20. Always an enjoyable exercise. Also included some brief comments on each one, for anyone who’s curious about that sort of thing.

END_OF_DOCUMENT_TOKEN_TO_BE_REPLACED

Satoshi Nishimura talks about adapting Kodansha Award-Winning manga Hajime no Ippo into TV anime Hajime no Ippo, roughly outlining his stance on this adaptation as a fairly strict “stick-to-the-source” tack.

END_OF_DOCUMENT_TOKEN_TO_BE_REPLACED

One of the fruits of digging into the adaptations of manga produced in 2011 has been a treasure trove of TV anime ratings data. Which, in turn, holds heaping helpings of unrelated but utterly fascinating information.

My favorite tidbit so far? Timeslots that get designated to run a certain kind of show are much more prevalent than I, at least, had thought. People may deify noitaminA for its stellar pre-Fractale record, but if you want to talk anime-focused timeslots with godly 7-year runs, there’s at least one very prominent contender. The Nihon TV 24:50 timeslot (plus/minus 10 minutes, depending on the quarter) hosted the following shows from 2000 to 2011:

Note in particular the period from 2004 to 2011. That’s some serious all-around ass-kicking, a double whammy of ratings that aren’t bad (especially for 12:50 in the morning) and maximal critic-pleasing potential. By all accounts, this timeslot is currently plugged; Chihayafuru’s second season aired at 25:59, and I can’t find anything currently airing in it. But still, phenomenal run. I guess I’m adding timeslots to the list of industry-related things that really ought to be looked into.

Edit: Corrected the title to reflect the actual day of the timeslot.

In Fall of 2007, I was very much a beginner at anime. I’d explored the discount stores in my neighborhood and encountered some very interesting, engaging titles, but I wasn’t any kind of plugged in to what stuff was current. One series changed all that, basically on its own.* Gambling Apocalypse Kaiji was the complete package in so many ways; tense, human drama, a rich cast that skirted the line from likeable to detestably inhuman, tight direction, idiomatic yet pithy dialogue, and the best narrator in anime bar none.

Those last 2 attributes also make the show handy for an alternate purpose; rampant quotation abuse! There’s a Kaiji quote for everything, and the Fall 2013 anime season is no exception. In celebration of the show’s free availability on crunchyroll, let’s break it down.

END_OF_DOCUMENT_TOKEN_TO_BE_REPLACED

Saturday’s slate is, as usual, packed. It’s also, in a less usual twist, clogged to the brim with sports. I’m saving Kuroko s2 for the nightcap, and for now going over the two adaptations of KMA-winning sports manga, old and new.

END_OF_DOCUMENT_TOKEN_TO_BE_REPLACED

It’s that time of quarter again! We’ve got a very interesting Fall season that’s coming out swinging this week, and there’s no better way to pay our respects to a season with potential deep sleepers like Tokyo Ravens and Gingitsune than to cavalierly turn them into race horses. We’re making mad bets on the Fall 2013 Season, Vegas-style!

END_OF_DOCUMENT_TOKEN_TO_BE_REPLACED

There’s no doubt Hajime no Ippo, between its length, consistent sales figures, and zesty-rich iconic cast that delivered an amazing quality of story. But that story’s quality level is averaged over a long run, and recently the manga’s been hampered by some baggage; blatantly unrealistic fights, predictable endings to said fights, and some questionable arc decisions.It got so bad that I didn’t trust George Morikawa to fix it, which is why I dropped the series for over a year, but fix it he did. Chapter 1029, making a centerpiece of the defeat of the previously stupidly invincible Itagaki Manabu, is just the latest in a long line of franchise-correcting tight corners.

END_OF_DOCUMENT_TOKEN_TO_BE_REPLACED

This was, first and foremost, a great Monokuma episode. His cosplay acting was a level up from normal, that back-and-forth between him and Naegi about the lack of cameras in the baths was solid banter, and the way he laughed when he found the kids snooping around the hidden room was spot-on. His character is probably one of the show’s 3 biggest achievements, unlike many villains who start to feel tired or experience character dilution, he still exudes the same threatening yet fun poise he’s had since day 1. And his declaration at the end shows two different kinds of astute villainy (depending on whether you see it as a bluff or not).

END_OF_DOCUMENT_TOKEN_TO_BE_REPLACED

Some time ago, I ragequit on George Morikawa’s long-running boxing series Hajime no Ippo. It had been on a low streak for a long time, and my favorite character of the series had just gotten cold-cocked in just about the cruelest way possible. I was angry, and, more importantly, kind of just tired. So I closed the book on what was then one of my 5 favorite manga.* 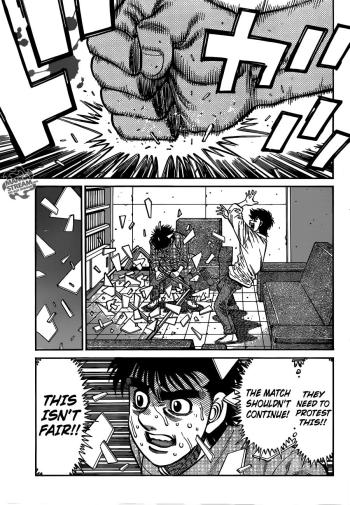 Recently, with the announcement of a third season for the anime, I resolved to get back to it. Last night, I actually did. Suffice to say it was a 45-chapter marathon session that left me eff-all motivated. Chapter 1008 was the high point of that session, reminding me why I like the main character of this series as much as I do.

One of the big appeals of this marathon is that I got to watch an intense title fight by Vorg Zangief, while watching the main character Ippo and rival Sendo get worked up over it. That’s where the picture above comes from. Now, chapter 1008 picks up after the fight is done and Vorg has taken the title with some very impressive heroics. So what do Ippo and Sendo do to cool off? If you guessed “fisticuffs”, you’d be on-target.

There’s just something really appealing about guys who love what they do enough that watching something exciting motivates them to get right to work. Welcome back to my weekly lineup, HnI.

*Since then, Natsu no Zenjitsu pushed it just out of my top five. It’s still a fantastic manga.

Based on what I’ve seen of reactions to Free on the internet, it seems like a large quantity of people are ruling it out with one glance at the promo material rather than 20 minutes of episode time. It’s becoming increasingly obvious how much of a shame that is, because this show is complete in ways it didn’t even have to be to be an enjoyable ride.