This was, first and foremost, a great Monokuma episode. His cosplay acting was a level up from normal, that back-and-forth between him and Naegi about the lack of cameras in the baths was solid banter, and the way he laughed when he found the kids snooping around the hidden room was spot-on. His character is probably one of the show’s 3 biggest achievements, unlike many villains who start to feel tired or experience character dilution, he still exudes the same threatening yet fun poise he’s had since day 1. And his declaration at the end shows two different kinds of astute villainy (depending on whether you see it as a bluff or not). 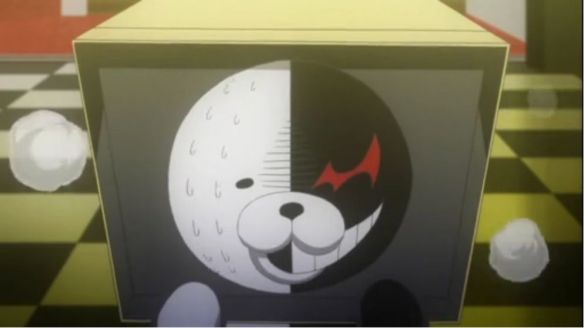 END_OF_DOCUMENT_TOKEN_TO_BE_REPLACED

This weekend, I sunk my teeth into the seventh installment of the Jojo’s Bizarre Adventure series, cheating a little bit as far as part order order goes.* It ended up being a very worthwhile decision, as I found the series contained bite after juicy bite of ridiculous (but not incomprehensible) content. It’s got everything from non-superpowered horse racing to dinosaur fights to spy-novel style infiltration scenes. It didn’t take me long to plow through the whole story, which integrates both a continental horserace and an epic bodyhunt. SBR is far from a perfect series,** but it’s got mad merits on writing and the way it uses full-page spreads to lay out a scene.

My favorite chapter of the series deals with a comically complex Stand/superpower that’s got abilities halfway between the Golden Axe fable and Leprechaun Gold. It works in the following way: the stand’s owner, Sugar Mountain, offers to return something that a person dropped, but offers both the thing dropped and a ridiculously more valuable version of the same (say you drop an Oreo cookie, she’ll offer you that or a two-pound cheesecake). If one answers honestly as to which they dropped, they get the works. They then have to use up both of those items in fair trades (i.e. they can’t just give them away for free) by sunset the day they receive them. If they fail to do both of those things, they turn into trees like so: 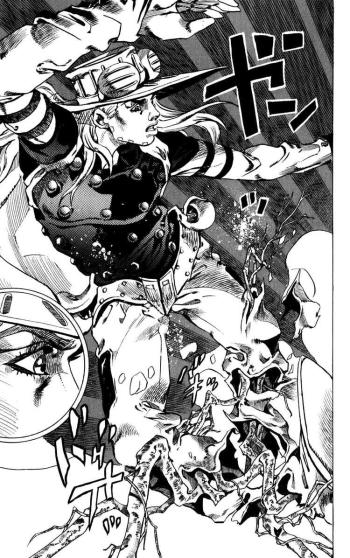 So that’s the general setup, introduced in the chapter prior to this one. Also in the prior chapter, protagonists Gyro and Johnny managed to finagle a couple of necessary body parts off of Sugar Mountain by correctly negotiating the Golden Axe rule of her stand. Beyond the body parts, they’ve acquired a diamond, gold ore, a fancy watch, and $50,000 in cold hard cash. This chapter follows them trying to avoid becoming petrified wood by burning through their Leprechaun Gold via fair trade. All while being chased by a bunch of government assassins. If you think that sounds like the basis of a hilarious heist comedy’s third act, well, you’d be more or less on the money.

END_OF_DOCUMENT_TOKEN_TO_BE_REPLACED

We’re a little past the halfway mark in Summer 2013, and with one more week of new material still to air, things are looking fairly positive. Sunday carries a (literally) shorter slate, but not one lacking punch.

END_OF_DOCUMENT_TOKEN_TO_BE_REPLACED

After sampling a bunch of try-hard comedies, it’s time to get to the real meat of Thursday’s crop. Or at least the stuff that was top-3 on himawari douga when I kicked up the streams.

END_OF_DOCUMENT_TOKEN_TO_BE_REPLACED

Halfway through this episode, I got the feeling that this was going to be the last semblance of a lull episode in the show before it ran down climax alley. And it did a good job, at both being a lull episode and fooling me into thinking not much else was going to happen in the b-plots. Boy, was eye ever wrong there.

END_OF_DOCUMENT_TOKEN_TO_BE_REPLACED

This show really does love to depend on new character introductions to provide a weekly hook. At first I was doubtful as to whether or not it was really feasible for a small-world type of show with only a few characters shown in the opening/on the boxart to maintain this approach for a full 13 episodes. This week was going to be critical, since every character from the opening had finally been introduced. So the makers this show faced a choice; if they didn’t want to lose their momentum, skim the bottom of the barrel or start building deeper relationships around the current cast. 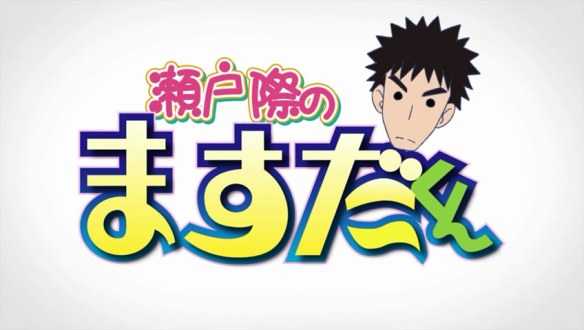 Or do both at the same time, what do I know?

END_OF_DOCUMENT_TOKEN_TO_BE_REPLACED 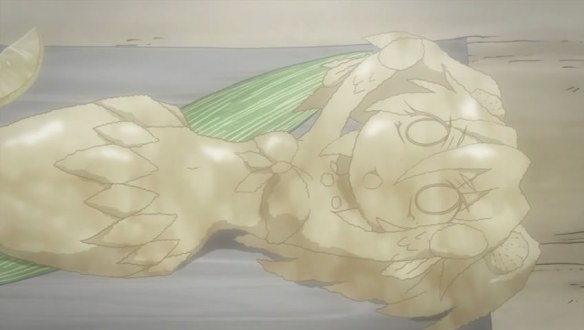 And they say fish can’t fry…

END_OF_DOCUMENT_TOKEN_TO_BE_REPLACED

It’s pretty clever that this show waited until the episode dealing with aliens to take a page from Japan’s most popular sci-fi franchise. A little bit of Doraemon flavor goes a long way. 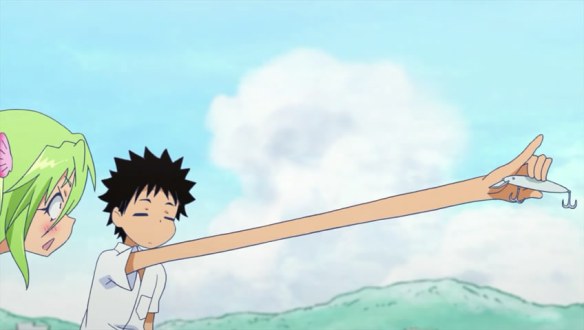 Plus, the gags are all stretched to just the right length

END_OF_DOCUMENT_TOKEN_TO_BE_REPLACED

Not only are some of the villains now good guys, and not only are the real villains better established, but this shift in circumstances was shown via their actions (rather than pseudoexciting revelationary monologue), and we even got some decent fight scenes to go with it all. Now *that* was a halfway climax!

END_OF_DOCUMENT_TOKEN_TO_BE_REPLACED

Space Brothers continuously comes off as an incredibly well-researched show. That’s not just in the macro sense (knowing which NASA agencies handle what, and the order in which astronaut training proceeds) but in the very micro sense as well; this episode was a great window into the minds of people smack in the middle of a design process trying to solve five problems at once.