This show really does love to depend on new character introductions to provide a weekly hook. At first I was doubtful as to whether or not it was really feasible for a small-world type of show with only a few characters shown in the opening/on the boxart to maintain this approach for a full 13 episodes. This week was going to be critical, since every character from the opening had finally been introduced. So the makers this show faced a choice; if they didn’t want to lose their momentum, skim the bottom of the barrel or start building deeper relationships around the current cast.

Or do both at the same time, what do I know?

If anything, digging deep enough to get to a 24-year-old convenience store manager dealing with an all-too-common set of everyday issues just pumped up the level of non-sequiter in this show. It’s got the right idea. One of my favorite anime comedies, Astro Fighter Sunred, does the same thing, constantly introducing new and increasingly bizarre monsters (such as one specifically based around the O-Bon festival who gets taunted for attacking a month after the festival is over) and letting the regular characters’ history with each other become its own mythos (Devilcat’s diabetes, Khanmenman and Antkiller’s sibling relationship). The revelation that Muromi was a regular man-eating customer at Otohime’s casino was of the latter type, whereas the surprise reappearance of the very mild-mannered Masuda at the end of the episode was the former. 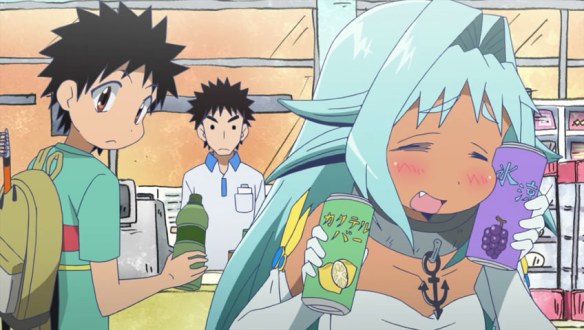 Truly a Masuda of stoicism

Speaking of recurring gags, Takuro’s old-timey poetic waxing, with its weird calming effects, always feels like it’s setting up for another genre of show. Everytime I see him do one of those I think about Dennou Coil or Zettai Shounen. Or Seitokai Yakuindomo, which played the same calming-atmosphere-to-crazy-sex-gag angle. In any event, it made for a good low-key contrast to the flesh-toned popsicle nudge-nudge sight gag later on. Not to mention the slightly less-subtle follow-up: 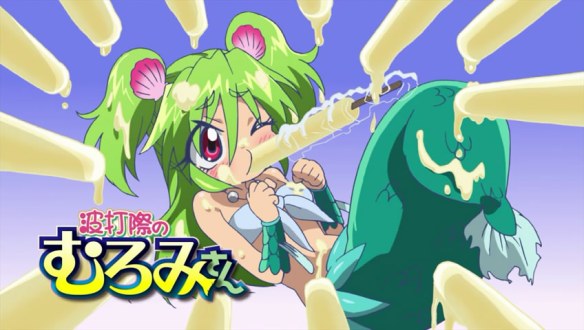 Perhaps “can’t unsee” gag would be a better term