So Hibito got right back to Earth, greeted the crowd, then collapsed onto a hospital bed due to gravity fatigue. Not much to say about the scenes where Hibito was readjusting to Earth’s gravity. It’s a real part of what astronauts go through, so of course Space Brothers handles it realistically. The writer was fun enough to approach it from a few different angles, the best of which was of course ultra-heavy Apo. 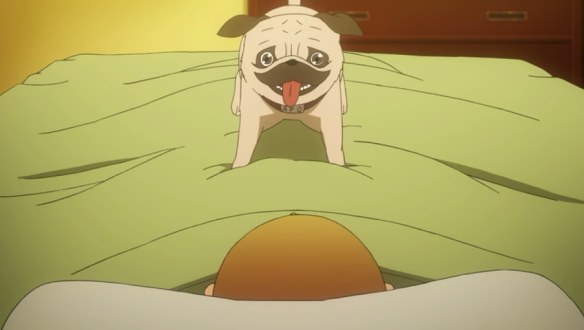 On the surface, at least, Hibito kept up his passive-aggressive push on Mutta to get lunar. Of course, now that he’s handing out souvenirs from the moon, he’s pretty much free to do whatever he likes. I hate it when people play the moonrock card. Anyways, it was very neat to finally get a window into just why Hibito has been so passive-aggressive the whole series in getting Mutta back on the road to space. Namely, a conversation with Sharon that flipped the whole “older brother must lead the younger brother” theme on its head. I’d be interested in exactly where in the show’s timeline that conversation occurred (i.e. before or after Hibito started getting better grades than Mutta), as that would significantly affect the meaning. Definitely had an impact on Hibito, though. Episode 7’s boiled-over frustration scene makes even more sense now; Hibito wasn’t just frustrated with Mutta’s self-deprecation, but because he had in his mind been doing everything possible to solve that problem to no avail.

You can definitely see ideas percolating in there

When Amanti’s doomy-doom predictions came up again this episode, my first reaction was “Again, really? This theme is starting to get stale.” When she actually gave a more detailed summary of what he prediction entailed, I immediately thought “I bet it’s Apo.” I mean, that way would make for a good anticlimax, and win the show a Newberry medal in the process. And then Sharon showed up on-screen immediately after. … At least having both brothers on Earth for her illness will be a good way to develop their characters. I still hope this time is one of the last Amanti’s fortune telling is ominously relevant, but the obvious death flags certainly added weight to the scene where Sharon was desperately pushing the lunar telescope project.

Being passionate and being ignored is one very painful mix