To me, anime is a hobby whose primary purpose is trading free time to for entertainment. So I’m always ready to drop shows that aren’t providing a fair return on that 20 minutes a week, in order to use the time on discovering classics, rediscovering the contents of my hardcopy disk collection, or just doing actual work. These are the Fall 2013 shows that prompted that decision.

END_OF_DOCUMENT_TOKEN_TO_BE_REPLACED

In Fall of 2007, I was very much a beginner at anime. I’d explored the discount stores in my neighborhood and encountered some very interesting, engaging titles, but I wasn’t any kind of plugged in to what stuff was current. One series changed all that, basically on its own.* Gambling Apocalypse Kaiji was the complete package in so many ways; tense, human drama, a rich cast that skirted the line from likeable to detestably inhuman, tight direction, idiomatic yet pithy dialogue, and the best narrator in anime bar none. 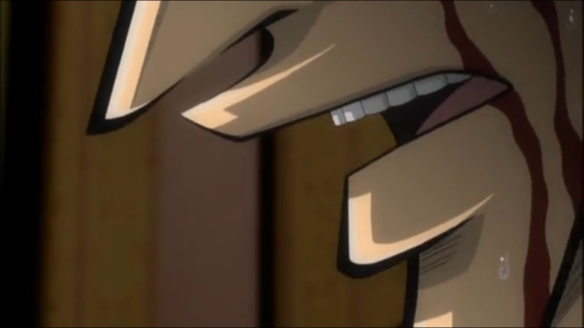 Those last 2 attributes also make the show handy for an alternate purpose; rampant quotation abuse! There’s a Kaiji quote for everything, and the Fall 2013 anime season is no exception. In celebration of the show’s free availability on crunchyroll, let’s break it down.

END_OF_DOCUMENT_TOKEN_TO_BE_REPLACED

Even though Thursday isn’t crowded, I’m on enough of a mid-major kick that Outbreak Company seems like a fun blog target right now. Golden Time is somewhat lacking in pizazz, though definitely a keeper, and Kill La Kill isn’t packing much more than a hollow imitation of TTGL/PSG after 2 episodes. Of the shows that I’m still following, Outbreak Company is only behind Tokyo Ravens right now in terms of how much it’s been able to surprise me, so I feel like it’s worth talking about until it proves me otherwise.

The fundamental appeal of Outbreak Company is one with a pretty good chance of striking a chord with anyone who’s ever had to get a friend started on anime, or convince people it wasn’t all one cliched genre. Thanks to the fact that it’s executing with minimal forced fanservice, what might become the saving grace of a lesser series becomes this show’s cold-steel core; watching a smart fanboy import culture with the full faith and credit of the Japanese government behind him. In essence, it’s a show that focuses on all the cool things happening in manga and anime (more manga so far) as a whole, respecting the power of both everlasting classics and modern-day megahits. For as low as I was on the show going in, I have to say it’s been executing its premise in more or less the best way possible.

END_OF_DOCUMENT_TOKEN_TO_BE_REPLACED

Wednesday was in many ways an unusually strong opening day. Thursday, by contrast, is usually expected to be one of the heavy hitters, largely because it’s the non-weekend day with the largest number of open timeslots. noitaminA doesn’t bring its heavy guns until next week, but there’s still some [nominally] A-list fare on the block.

END_OF_DOCUMENT_TOKEN_TO_BE_REPLACED

It’s that time of quarter again! We’ve got a very interesting Fall season that’s coming out swinging this week, and there’s no better way to pay our respects to a season with potential deep sleepers like Tokyo Ravens and Gingitsune than to cavalierly turn them into race horses. We’re making mad bets on the Fall 2013 Season, Vegas-style!