Even though Thursday isn’t crowded, I’m on enough of a mid-major kick that Outbreak Company seems like a fun blog target right now. Golden Time is somewhat lacking in pizazz, though definitely a keeper, and Kill La Kill isn’t packing much more than a hollow imitation of TTGL/PSG after 2 episodes. Of the shows that I’m still following, Outbreak Company is only behind Tokyo Ravens right now in terms of how much it’s been able to surprise me, so I feel like it’s worth talking about until it proves me otherwise.

The fundamental appeal of Outbreak Company is one with a pretty good chance of striking a chord with anyone who’s ever had to get a friend started on anime, or convince people it wasn’t all one cliched genre. Thanks to the fact that it’s executing with minimal forced fanservice, what might become the saving grace of a lesser series becomes this show’s cold-steel core; watching a smart fanboy import culture with the full faith and credit of the Japanese government behind him. In essence, it’s a show that focuses on all the cool things happening in manga and anime (more manga so far) as a whole, respecting the power of both everlasting classics and modern-day megahits. For as low as I was on the show going in, I have to say it’s been executing its premise in more or less the best way possible.

I mean, that’s a eff-all fascinating hypothetical; what if you had to introduce anime to aliens, given a week to study their culture and the backing of the government to gather whatever it is you need logistically? The show is setting up the situation and providing a plausible, entertaining answer scenario, but the situation alone is excellent discussion fodder.** The fact that the main character’s been largely successful in his early attempts thanks to a willingness to adjust his material to his audience and a not infinite, but significant degree of patience with the local customs lends the show miles of credibility. With a competent protagonist, Outbreak Company doesn’t have to get mired down in him screwing up, and can unleash the full potential of manga as an emotional medium, from the hard-hitting speeches to the comedies that suddenly turn touching.

It also meant a lot that some of the manga Shinichi chose to introduce to the world were actual mainstream-to-Japan classics, not just works steeped in otaku culture. Bastard!! is of course only one example, but it’s a potent one. These references are a lot more than just recalling a show for fun; they also showcase how people react to these moments in real life. Goodness knows people have gotten antsy waiting for the continuation of Underground Chinchiro the same way Petralca did in-universe. 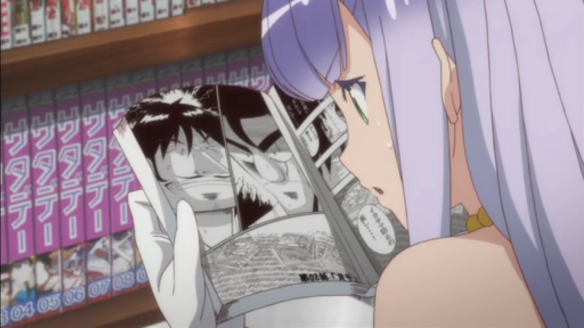 That wasn’t even the only case where Shinichi showed savvy in bridging the cultural gap. He also conquered the problem of having readers that don’t understand the language with relative ease. Rather than starting with language lessons, he took advantage of the visual nature of manga and handled the first experience into a storybook-style reading, letting the pictures speak for themselves while translating the dialogue. The fact that even small things like that are being nailed speaks well to the general level of preparation that went into the script. The government really drew the long straw when they plucked him off the internet. 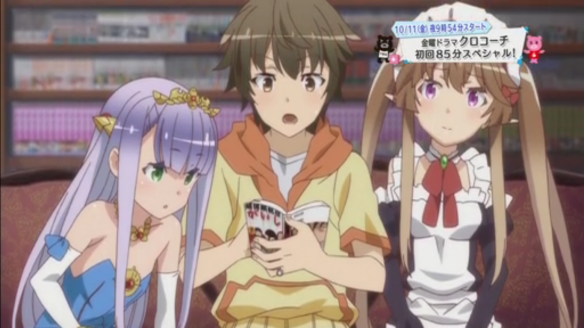 There were indications of a tendency towards melodrama this episode, mainly setting up the “royals mistreat commoners on a regular basis” plot that’s certainly not unique to this show. But right now, I’m very much convinced that this show can handle it better than the average bear. If it continues to work in references with care and keep characters functioning at normal human levels of intelligence, it has a puncher’s chance of making it into my top 5 shows of the year.***

*I’m definitely blogging Tokusatsu Dai-Guard Samurai Flamenco, but I won’t have to start on that until next week. That show may or may not provide the perfect opening paragraph of an article comparing the careers of Seiji Mizushima (Dai-Guard, Hanamaru Kindergarten, FMA) and Takahiro Omori (Samurai Flamenco, Koi Kaze, Baccano) that I would absolutely love to write, and just generally has potential up the innards.

**For example, do you go for popular-market heavy hitters or artistic/emotional classics? For the record, I’m going with some combination of Redline, Eva, Kare Kano, Slam Dunk Laputa, Kaiji, Noein, ef, and Kaiba if I’m flying blind and want the best odds of success. If I have some cultural background, of course, I’m adjusting that plan heavily to match.

***And not just because Shinichi was using Hajime no Ippo to teach Katakana.