I can’t help myself. Coppelion may have had the better high-concept first episode, but Kyoukai no Kanata presented the higher ceiling. That and the 100% odds I have of blogging Tokyo Ravens at this point gives me the chance to blog two good mid-major battle series for the first time since opening the blog. No way I’m passing that opportunity up.

Last week, I did have two semi-serious complaints about this show – the dialogue was a bit canned, and the camerawork was a bit uninspired when the action wasn’t running at 100 klicks per hour. The show’s pluses (aforementioned action and the male lead’s Yokoshima Tadao/Taiga Kuzumi combat style) were still more than enough to make it one of my favorite first episodes of the season. This episode’s combat scenes continued to be a great ranging experience, but I wasn’t really expecting it to get the dialogue into a rhythm as fast as it did.

It’s fairly simple to describe what made the combat so entertaining; Mirai kept re-strategizing and maneuvering around the mummy’s attempts to escape, something which ranges from the alleys to the rooftops and involved a lot of clever diversionary attacks on the mummy’s part, and the fighting when she got into her CQC range was slickly handled, making use of both shiny motion and shutter-frame camera sequences as the staff saw fit. I suppose it’s also a plus that all the high-functioning fight choreography was just in there making the case for itself; the dialogue wasn’t explaining what was happening so much at it was a running commentary between Mirai and Akihito. 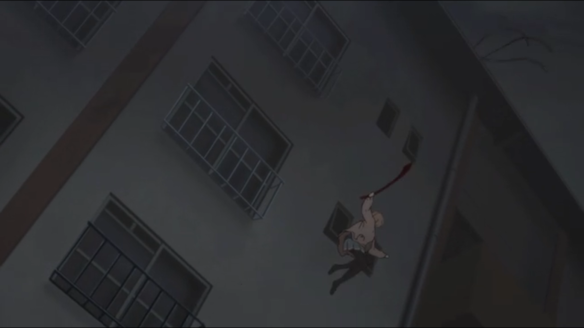 Speaking of the lead couple, their chemistry, and that of the cast in general, was a lot more dynamic this episode. I’m not sure if it’s because they started getting used to each other and they’re playing off each other in more ways, because casting Nanba Hibito as an immortal busybody straightman is just now paying off, or because the newly introduced cast members (Hiromi and Akihito’s mom) found fresh and exciting ways of getting under Akihito’s skin, but everything that felt tired and rusty last episode just… didn’t this week.

It feels like the introductory content arc of the series is more or less taken care of, and we’re now looking at the writer’s first chance to bring buildup and continuity into the equation. Facing off against a super-class demon should provide plenty of opportunities for the main characters to pull off a scrappy, unlikely victory (or something close to it) while mixing in further character growth. Mirai and Akihito’s respective homicide rap sheets are probably going to be harvested for material sooner rather than later.