This week’s episode of Devil Survivor 2 was the blandest one of the show, and will probably end up skippable even if the later episodes end up being good (something I’m beginning to seriously doubt).

While events did happen this episode (Hibiki choosing to work with Yamato again, everyone getting health checkups, JPs unveiling their new teleporter), it felt like more and more time was spent on minor stuff that felt minor. Alcor’s obsession with finding the “Shining One” felt like dialogue written by middle schoolers way too obsessed with their own terminology. And for a lull episode, we didn’t really get much in the way of character development beyond the incredibly minor nurse character. And no, peeping misunderstandings don’t really count in that column. 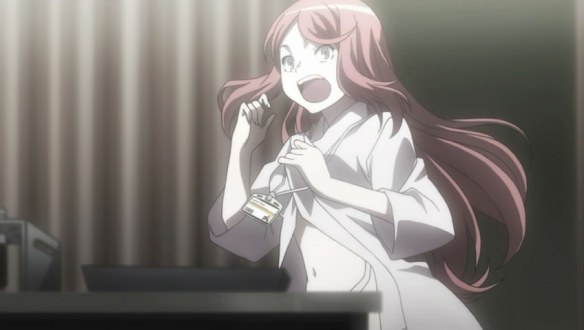 I’m going to keep watching this show because I care just enough about where the character plotlines are going and the potential inherent in a 3-front battle scene. But my expectations are tempered severely by the last two episodes, and, realistically, Devil Survivor 2’s best case scenario right now represents it being the Iron Man to Dangan Ronpa’s Redline (a show that was bad because its staff were busy maximizing the other show’s awesome quotient). There’s a pretty decent chance I might swap it up for the last Thursday show I’m enjoying (Hataraku Maou-sama) next week if the next battle falls flat.