Yoshida Matoi’s Natsu no Zenjitsu is a fantastic work about artists and art with the best actual artstyle I’ve ever seen. Unlike a lot of artists with exceptionally good art, though, Matoi also knows storyboarding and the finer points of manga. The result is a consistent barrage of scenes that convey emotions and sensations as only manga can. This chapter, featuring a main character feeling what’s best described as “complex distress” is full of such scenes. 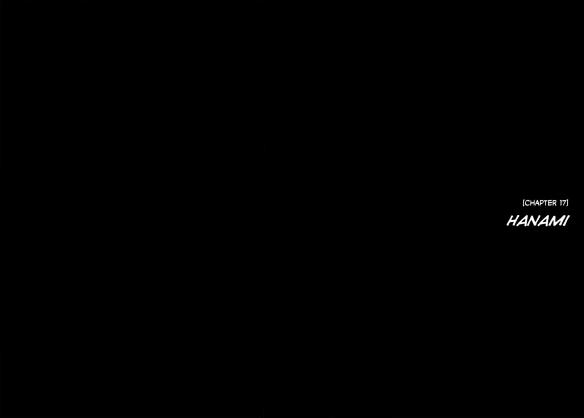 Scenes that, I’m sure, left the Good! Afternoon guy in charge of ink crying his eyes out

So before I go full geek, a bit of background. The series’ male lead, painter Tetsuo, is in a fairly stable and happy relationship with an older art dealer, Akira. However, he uses visions of another girl (first name Hanami), whom he’s never spoken with, to fuel his creativity in his current painting. It’s already a complicated dynamic which combines different kinds of affection. In many ways, I don’t understand it any better than Tetsuo does. And this chapter forces the dynamic to advance, as Testuo meets Hanami for the first time when she’s unexpectedly dating his friend and bandmate Aoki and shows up before one of their concerts. The manga wastes no time showcasing Tetsuo’s distressed, confused state, pumping on a lot of blacked out ink, blurring text in speech bubbles, and depicting the next several hours of concert time as a jumbled blur from his point of view. My favorite bit is the use of an all-black panel, something that few artists really understand how to use.*

Beyond its depressed-psyche shtick, this chapter has good long-term implications for the manga, as it ultimately forces Tetsuo to confront himself and figure out what he really wants to do. I ultimately have no idea how the plot is going to shake down, and while I’m personally rooting for Tetsuo to stay together with Akira, sufficiently good delivery makes any conclusion possible. Certainly, if Good Ending managed to pull off a satisfying ending after multiple breakups, so can this series.

*Lucifer and the Biscuit Hammer, though, contains a very potent all-white panel.