Woop, it’s Thursday, the day of massive-impact airing!* We’ll have to wait a week for Silver Spoon, but there’s a six-shooter’s worth of ammo to chew on in the meantime.

Love Lab was the first thing I watched today, courtesy of a die coming up with the number 2. It was an interesting starter to the night, packing in a lot of ribbing on some romance cliches and some characters who were already slowly advancing out of pure one-dimensional stereotyping. I had a lot of fun with the manly character who bluffed about her experience, while in reality guys were always confessing to her… friends. The pacing was appropriately set and the mod was casually upbeat. This gave the good jokes time to shine while not forcing the bad ones to fill up too much space. That’s a good direction format for comedies; it’s effectively a no-look pass to the dialogue and really only needs a decent writer to finish the layup. I’m thinking this one’s worth 1 more episode of test-running to figure out exactly where it ranks among the season’s other comedies (the genre is typically pretty crowded). 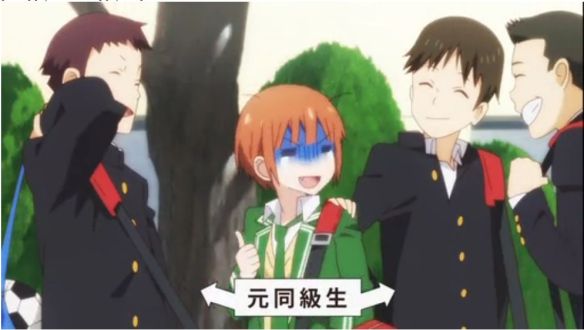 I had seen enough of Symphogear’s season 1 (6-ish episodes) and had too much riding on it in the Summer 2013 preview wagers to not at least see what the first episode was like. It opened with a good-concept-poor-execution wordless black and white flashback, which featured new characters was too out-of-context to really feel appropriate. But then it popped out a surprisingly well-done chase scene to reintroduce the old guard cast and begin building the main plotline. I can’t stress enough that this is by far the best way to open an anime up and do exposition without being boring. After the chase ended at 9 minutes in, they almost immediately foreshadowed the main villain in a hilariously obvious fashion. The remainder of the episode not featuring Nana Mizuki’s singing voice was a mudpile, but still, this was a decent effort. Given my history with the first season, I’ll give it 1 more episode, but on a week-by-week basis. 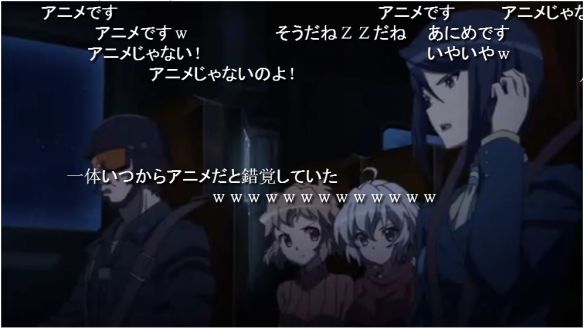 Going into C3-bu, I knew two things a) that it was about girls playing airsoft survival games and b) it was made by Studio Gainax in an age where their brand name is basically moot.** So my expectations were decidedly mixed; fun premise, but unreliable backers. It opened with very standard handling of a very standard premise; a shy girl moving into a new high school and failing to get off on the right foot. The leading lady wasn’t particularly interesting, but the rest of the cast made up for it very quickly; the scene with them planning their recruitment drive was solidly amusing and got me on the rails for the rest of the episode. They only got more entertaining when the actual survival games started and the soundtrack got jazzy. This one gets 2 more episodes out of a fine start.*** 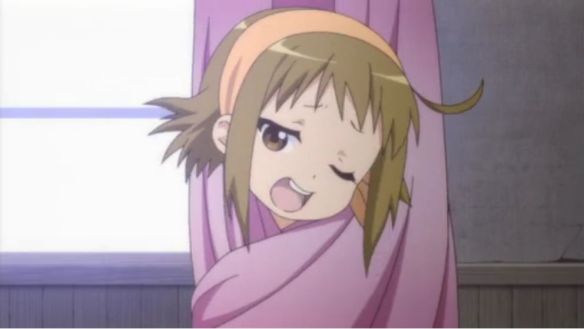 *Technically, it was still Thursday when I started writing this. So there.

**They lost Hiroyuki Imaishi in mid-2011 when he left to form Studio Trigger and since then their only project has been Medaka Box. It’s a lot like post-Koji Kajita Gonzo; since he left the company in 2007, they made Rosario to Vampire and Strike Witches while he made Level E and Jojo’s Bizarre Adventure.

***Or really all of them if the rest of the episodes contain jazz-battles where the music rises to match the intensity on-screen.