Dangan Ronpa is so damn campy. But I love campy. So I love it. In all seriousness, there was a choice to be made when this anime was adapted. The staff could take the source material and turn it into a serious work about a bunch of teenagers forced to kill each other in a sadistic game they’ve been trapped inside of. Not that that genre is at all saturated. Or they could just make an anime that celebrates the already zany source material and went wild with the game-adaptation portion. There were plenty of points this episode where I found myself thinking “oh yeah, this is a game adaptation”, but there were exactly zero where I found myself minding. 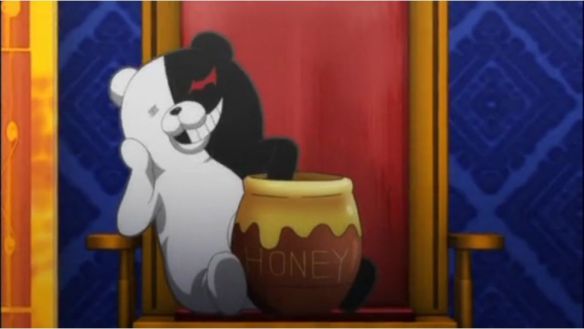 So yes, I do recognize that a fair portion of this anime is taking its cues straight from the game, and that’s fine. Speaking as someone who hasn’t seen it, the dialogue easily carried the scenes where the visuals were just the characters standing around debating, and they didn’t linger on any one point long enough for things to get boring. Too, it lends a different feel seeing phrase-bullets being fired out of a gun, when one isn’t the player character doing it, but just an observer munching on his popcorn.

And there were points where the visual execution was doing the heavy lifting. Kishi Seiji’s veteran direction shone through in a couple of key scenes in the second half that really brought the focus on how desperate the obviously-guilty Leon was getting. The scene where he and Makoto were going back-and-forth and the camera was gradually zooming in on each of their faces. The individual transitions from shot-to-shot didn’t carry much impact, but the end result did; it was such gloriously over-the-top use of shaky camera angles.

More subtly, there was the scene before he started to need Visine where suspicions were cast on him for the first time, where the show was gradually building up to beady red eyes and maniacal chanting. When it was still less certain that he was the culprit, the camera was placed behind him and focused the people doing the questioning, something that called attention to both his body language and the rest of the students getting gradually more suspicious. It was a nice touch from a chronically underrated director.*

With this, a full arc has gone by and been executed with considerable panache. This show is on pace to kill off a lot of characters very quickly. 3 dead in 3 episodes lays out plenty of room to shrink, so to speak. I’m pretty pumped for next week’s helping of Danganzola cheese.

*There’s a visibility bias running pretty deep in the anime fandom towards overrating directors who have a noticeable visual style (Akiyuki Shinbo’s backgrounds and oddball cuts, Shinichiro Watanabe’s music scenes, Kazuo Koike’s punky motion animation) and underrating directors who specialize in equally important things like compressed pacing, body language, volume production, and camera handling. I’m talking about people like Ayumu Watanabe, Takahiro Omori, and Hirao Takayuki along with Kishi himself. Not to say that directors with their own distinctive styles aren’t great, just that having one is not the only way to be great. I could editorialize this subject all day, but suffice to say it’s one of my pet peeves.