When I set out to watch anime from the glorious annals of history, there are three general lines of attack I follow. First, I look for agreed-upon classics, shows everyone agrees are great and influential. Second, I look at catalogs, shows made by directors, writers, or studios that have a bunch of other impressive tics on their resume. Third, I listen to recommendations when people make them. Solty Rei, a 2005 sci-fi show about bounty hunter/parent Roy Revant and his two daughters, found its way to me via the second and third channels. The show ended up being a wholly worthwhile experience, an easy marathon that rightfully belongs in the early Gonzo catalog with its host of impressive titles.

In many ways, Solty Rei initially comes off as a very generic cyberpunk series. Its initial focus is on Roy, a gruff, older bounty hunter working with his powerful adopted robot daughter, Solty, to chase down bounties, most notably a trio of theives led by bandita Rose Anderson. All the while, Roy’s searching for his real daughter, Rita, who was lost in an explosion over a decade prior to the beginning of the show. This leads to a couple of serious missions that reveal little pieces of the world the series takes place in, run by a monolithic corporation which maintains power over the citizens by controlling distribution synthetic body parts that have become a near-omnipresent necessity. By halfway through the series, there’s a pretty complete picture of the less-than-perfect world etched into the viewers’ heads.

However, Solty Rei isn’t gritty, dark and violent in the way that, say, Heat Guy J tries really tries to be. This show gets the mixing of comedy and drama better than any show since at least Full Metal Panic, another vintage Studio Gonzo title. Which is actually a pretty close analogy to how the show plays out. After the first bunch of episodes alternate between Roy’s serious hunter work and more benign but very funny slice-of-life bits, the midway point of the series introduces several new plot elements simultaneously. Arguably, a series should be bringing its A-game to every episode, and its A+ game to episode 1. But there is still such a thing as going into first gear at exactly the right time. I mention this because Solty Rei’s pacing nails that sweet spot. A sadistic mad bomber bent on revenge takes center stage in episode 11, and he’s by far the most effective villain up until that point, forcing dedicated cooperation between most of the main cast and presiding over some very pertinent revelations. The smoking crater he leaves in his wake has enormous implications and marks the point where it becomes impossible not to watch the show’s next episode, climaxing in a confrontation between Roy and Rose and the revelation of the whereabouts of Roy’s biological daughter. I had a whole post ready to go about how brilliant and the writing in this series was. I decided not to post it because the phrase “nut punch” has no business appearing that many times in one article. 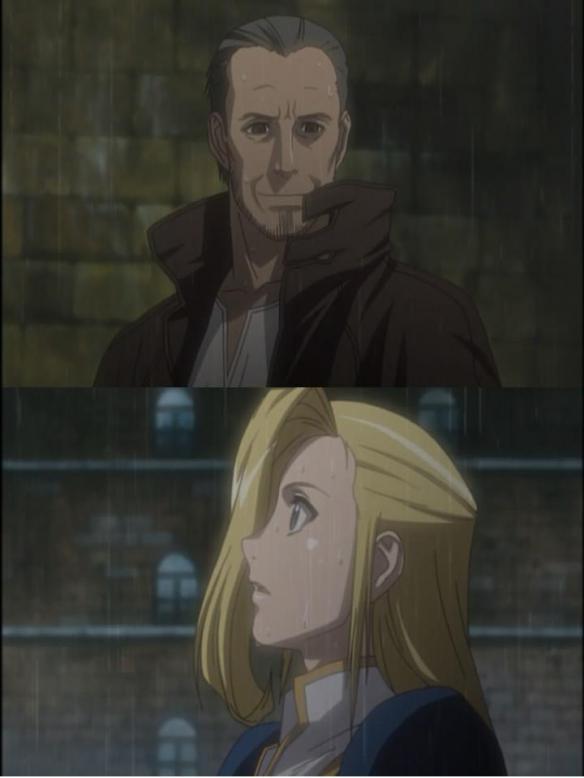 There are many things that Solty Rei does really, really well in its second half. First of all, it spends several episodes with a character alone by himself in a dimly lit room with a bottle of hard liquor, trying and failing to keep his problems away. It’s a very sobering image that never lets up, as friends visit him and he turns them and their consolations away one by one, sometimes very harshly. Secondly, it features several different groups of professionals on the run from the law, each taking steps to evade detection and escape their present predicament in a way that makes them seem every bit the specialists the story makes them out to be. Thirdly, it cracks open no less than 3 very major plot threads at the onset of episode 14, and manages to weave them together with the pacing of a top-tier thriller novel. The show watches much like a Naoki Urasawa manga reads, albiet not quite on the same level.

Suffice to say the characters are well-established and carry the increasingly complex dramatic plot with ease. Roy with his gruff fatherly demeanor that occasionally gets overwhelmed by guilt, Rose with her internal sense of justice mixed with a selfish spunk, and Solty with her childish innocence and freakish strength. Rose’s two siblings also stand out for how they evolve from background men into true individuals as the series progresses, showing their skills and attitudes as professionals as the machinations driving the plot call for great theives. A group of four female enforcers working for the corporation controlling the city also figure in big, starring in a riveting C-plot featuring intrigue and betrayal, that carries the entire show for a good 3 episodes shortly after the midway point and eventually involves the entire cast in some form.

There are two major flaws in the show’s script that prevent me from giving it the full 10 points. One involves a scene where a character acts uncharacteristically cruel (not just uncaring or indifferent, but deliberately cruel) for reasons that were never explained and end up feeling incredibly meaningless once the show ends. The second is that it spends about 35 minutes worth of screentime in the climax very directly ripping off the plot of Xenogears, and not in a particularly flattering way. These two moments are both highly nontrivial and do somewhat spoil the otherwise deftly-engineered roller coaster that is Solty Rei.

On the whole, though, I can’t find a ton of reasons not to recommend this show. It skillyfully combines a cyberpunk thriller with a massive cast with a first-rate story of paternal love, and (against Gonzo’s general track record) ends in an extremely satisfying manner.

Character Designs: [Shujirou Hamakawa]
1/1 (Roy looks every bit the vulnerable tough guy the story makes him out to be)

Overall:
9/10 (A cast full of great characters makes it very much worth watching.)