This is only the second episode of the year to which my immediate reaction was to go back and watch the whole damn thing over again. While the last four minutes of it will understandably get the most attention, that was by no means the only part of the episode that wowed. There was so much stuff happening this episode, well beyond the typical level of “everyone doing their own thing” that characterized the episodes introducing the Flamenco Girls. Looking back on the episode a second time, it’s actually pretty clear that most elements of this episode were there to bring the first, more realistic portion of the series to a close while still keeping some compelling elements simmering. Because while the choreography of the fight scene in the final minutes was delightfully down to earth,* that doesn’t change the fact that it was against a man who had animorphed into a mechanical gorilla with a guillotine in its chest.

Before this episode pushed all its chips on black with that awesome gorilla scene, it impressed considerably with the reveal about Masayoshi’s parents’s deaths. The actual reveal itself wasn’t the meat of it, but that presentation was exceptional. I really like the choice to make that moment a mental conversation between Samurai Flamenco and his creator, rather than simply showing Masayoshi read the information. It speaks to shock on a much deeper emotional level, something the audience needs to empathize with going forward. The best part of all that? Try the blank page Masayoshi turned to after the reveal was made. Talk about strong imagery; it’s not as obvious a push as “You’re gonna carry that weight.”, but it’s not far behind in terms of sending a strong message. Now that the guidebook is finished, it’s up to the student to finish the story. 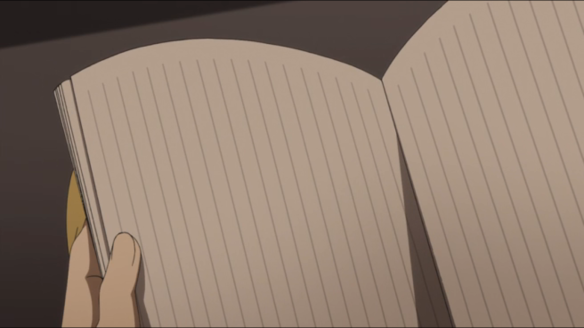 Of course, that boost in conviction, coupled with a hard-earned reduction in crime rates, very neatly fed into the next step in SF’s hero career, serving as a police chief for a day.** Since it was going after a cocaine facility, I was expecting he would get mixed up in some violence. But, at least before the mysterious pill very conspicuously dropped to the floor, I was expecting something on the order of a blocked gunshot or a defused bomb. I was not expecting a gorilla with the voice of Rudolf von Stroheim to viscerally decapitate a cop. That didn’t so much smell like raised stakes as it did break a bottle of Essence of Akagi Shigeru all over the show..

The biggest shock factor from this episode may be the gorilla, but it shouldn’t distract from what was in general an excellently-scripted fight sequence. The fight scene itself reminded me very much of early Sakura Wars, where the team struggled to defeat single kouma and ended pretty much every fight with dozens of new claw-shaped scratches on their machines. I liked how the technology was more or less useless and they ended up just barely scraping by with a bag of cocaine and a riot shield.

If this is just some dream sequence, that’s fine because it’s been well-handled and the impact is very definite. But if this is some prolonged prologue shit a-la Visions of Escaflowne, and I’m inclined to think it is, it blows the lid off any ceiling the show may have had. In that case, reroll your character sheets, because Omori just brought the dragons.

*It’s sentai hero Dai-Guard. There can no longer be any doubt whatsoever. Cue the celebratory anthem.

**Finally putting his entertainment on the same level as Shijou Takane.