It seems like a bit of a truism to say that SF has changed significantly since the beginning of the show. While it’s true that the show has upped the ante in a number of ways since the main duo defenestrated a gorilla, the change in the core of the show has been a little more delayed and tougher to identify. Before the obvious change, and even immediately after, the show was weird in a quirky kind of realistic downbeat humor. Then things got serious with King Torture, but now that that’s past, the show doesn’t seem to be going back to that kind of small-things approach. Instead, we got Red Axe in full costume and a helicopter tapping Masayoshi to lead a fight against alien spore warriors apparently created by a combination of alien spores and Sketch Turner. 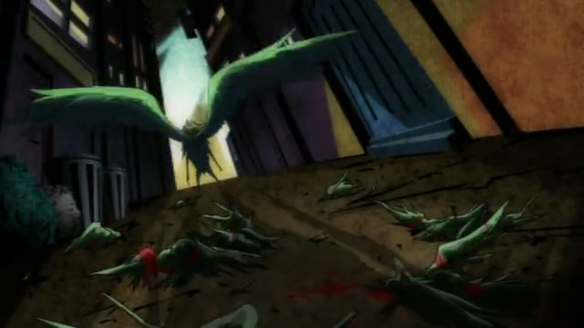 In short, the show is relying a lot less on cleverness than it used to. The scripts as they were this week weren’t not fun, but they were less clever. It used to be built around oddity, and now it’s built around spectacle. While stuff like the scene where everybody came out in red ranger uniforms was in that old brand, the general trend of the episode was to rely on bigger and bigger situations to make less clever dialogue hit its mark. It worked, and I don’t dislike that kind of power play production, but it can as easily collapse on itself like a neutron star if it keeps on adding weight without a base of material to fuel the characters. I don’t believe it will implode, but it’s something to watch out for come January. 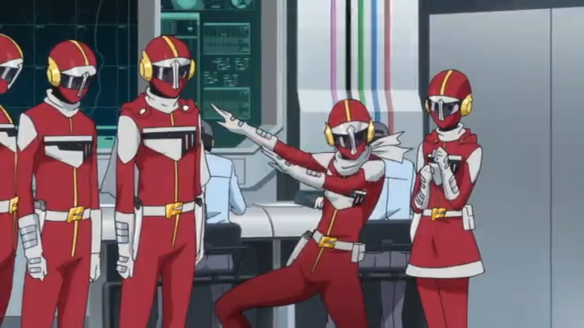 A note: for reasons that have nothing to do with this show itself and everything to do with how I want to try running the blog in next year, this will be my last post on it in a weekly format. I’ll post about this in detail soon, but it’s difficult to write the longer-form articles, which require a generally higher degree of prep, when I’m working on weekly deadlines, so I’m going to try and loosen up the deadlines and emphasize quality over quantity.