What particularly did it for me was the once scene of Iona evading the missiles while airborne. I mean, we knew mental models could do superhuman things, but that was nothing if not a spectacle rivaling some episodes of Asura’s Wrath. To say nothing of the Unlimited Blade Works biz Kongou pulled out once Iona actually reached her. I’m gonna remember that scene for a long time. Forget what I’ve been saying about not being able to do full-body motion in 3D anime, and lump it in with what I’ve been saying about 3D anime in general; it’s demonstrably doable (Kishi & Uezu, 2013). 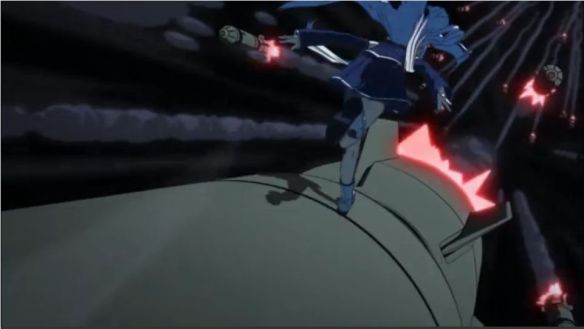 Two side notes before I finish up. First, if there was one thing I liked about Kirishima, it was the silliness of her being in a Teddy Bear while retaining her core personality. Nowhere was that more on display than the moment in this episode when the Bear started going Arrivederci all over the missile swarm readouts.

Second, aside from the first episode and one bit in episode 5, the show has been nigh-entirely devoid of flashbacks, opting to introduce characters by having them do things. This didn’t just mean devoting full episodes at a time to particular characters, but showing how both the crew and various enemies reacted to a variety of situations. Given the 12-episode nature of the anime and the fact that the plot was packed as tight as it was, that seems like an even better decision in hindsight.

Character Designs: 1/1 (Even characters that seemed robotic at first proved capable of a wide emotional range as the story progressed.)

Soundtrack: 2/2 (Well matched to both the tense naval battles and awkward social situations the crew found themselves in.)

Direction: 4/4 (In addition to building a generally solid alternating comedy/battle atmosphere, Kishi Seiji does an excellent job in covering for what was mostly the largest deficiency, full-body locomotion, of the animation style, liberally applying cutaways, reduced FPS, and other visual slights-of-hand to keep the show entertaining. Too, the action is an expensive display not to be missed.)

Overall: 9/10 (A very entertaining ride throughout, partially thanks to the aspects it borrows from 70s/80s era military anime.)

*A perfect time to stick in a reiteration of the point about how using 3D opens, rather than closes, doors for anime as a whole when it’s not being used purely to cut corners.