The two most influential series in the history of anime are almost indisputably Neon Genesis Evangelion and Mobile Suit Gundam, a pair of robot shows which showcased the buying power of Japanese otaku and led to an explosion of new material being produced. I’ve written previously about the late-night boom fueled by Eva’s success, but to say Gundam deserves less credit is to ignore one of the best–dramatized underdog stories in anime history. Then-16-year-veteran Yoshiyuki Tomino straight-up flipped a series meant to sell toys to kids for a realistic science-fiction epic in an era where the main thing robots did on TV was wrestle with one another for the spectacle. The results of Gundam’s eventual success were many; it spawned one of anime’s longest-lived franchises and has accounted for tens of billions yen in model sales per year to this day. But it had another key effect on the industry – it got people thinking about how to harness the fans with a serious sci-fi bent that Gundam had shown to be there for the taking.

Towards the end of 1983, one year after the final installment of the Gundam movie trilogy was released, the recently-formed Studio Pierrot released the first episode of what is considered to be the first OVA series ever, Mamoru Oshii’s Dallos. The series enjoyed healthy success, and several other companies began commissioning OVA projects. What followed was a surge in the amount of new original and manga-spinoff adaptation projects marketed chiefly towards older audiences, both hentai* and not (per myanimelist, charted here). The yearly abundance of non-hentai OVAs is plotted below, along with the number of TV anime and ONAs (included mainly as a curiousity) in that same period. 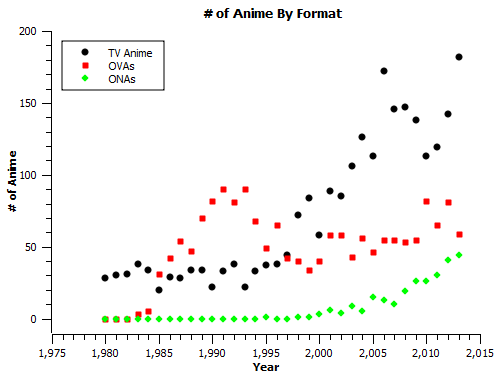 The OVA Boom peaked from 1990-1993, a 4 year period which saw a total of over 300 OVA series of varying length released. Some of these were spinoffs/continuations of successful TV series, but many were new, risky projects that may or may not have gotten funding for a TV series (especially since 12- and 24-episode anime were comparatively rare in the pre-late night age).

I’ve seen more than one person postulate that OVAs released in the early 90s can be seen as projects that would have been TV anime in the late 90s, which is a very interesting question to examine. In actuality, the abundance of OVAs started to drop off several years prior to the late-night boom, which is a point against the idea that late night TV anime caused the decline in the number of OVAs. More likely, the businesses producing these OVAs got past the pure-experimentation phase and raised the bar a bit for what was considered an acceptable project, and the successes of late night TV anime only accentuated a scaling back that was already in progress. It was likely immensely helpful to the content standards of the late night boom that there had already been this era of heavy experimentation/exploration from which production teams could draw guidance.

That doesn’t mean late night TV didn’t take some OVA material for itself, though. Several mid-90s OVAs (Master Mosquiton, Shadow Skill) got full TV series during the boom period, and the yearly count of OVAs hit rock bottom in the middle of the late night boom. There are reasons why it could be argued that a break-even TV show actually holds more value to the industry than a fairly profitable OVA made on the same per-episode budget. I covered some of them in my original post on the early late night era; TV ad revenue income, free advertising, an expanded audience of fans are all pluses exclusive to TV anime.** One of the other, less-obvious reasons is that modern animator salaries are very low (veterans get paid exactly at the $22,000/2.2 million yen poverty line for a family of four, newer workers make half that), partially because there are a lot of people in competition who really want those available jobs. If you took away TV anime and replaced them with 6-episode OVAs, there’s a good chance that the reduced amount of available work would lead to a lot more young animators unemployed and hungry for work, which could drive salaries even lower for those still employed. Also, a successful TV anime makes a lot more total money;  2-episode volumes carried similar prices to 40-minute OVAs, and rereleases can charge significantly more. Even given the higher risk in case of failure, these are all reasons why TV anime makes a healthier business model.

Still, certain publishers in recent years have been exploring the OVA market more heavily, and we’ve seen a larger number of OVAs tied to TV anime which are less likely to get full-season sequels. Though both series did eventually get second seasons, long-haul franchises SYD and Yozakura Quartet, which draw much higher sales by repeatedly bundling disks for essentially full price with a volume of manga, are particularly notable. The latter in particular stands as a potentially interesting case study for tapping fans whose disposable income per season falls short of the cost of a typical TV series. That said, it’s a very debatable question as to how heavily the demographics of those series drove sales, and how that would change for series with similarly low disk sales and high manga sales but different fanbase types like Giant Killing, WataMote, and Kamisama Kiss.*** It’s one of those interesting-but-difficult questions, ala the effects of anime-game adaptations, that I’ve been trying to get a handle on for some time. At any rate, OVAs represent an important part of anime history, and a not at all uninteresting part of its present, which is some worthwhile discussion fodder.

**Also, airing on TV in some cases can provide the main source of funding (ala NHK today or NTV during Madhouse’s heyday).

***It’s a similar issue to the Blood-C pricepoint issue I talked about earlier today. Some series have fanbases that favor mid-cost content, others don’t.