I haven’t really done any kind of cleaning up of this blog since I started it a little over a year ago, so if you do a little digging, you can kind of tell that I originally intended for this to be more of a visuals-focused breakdown blog.* I started out the usual way, covering episodes week to week and churning out an occasional review. Obviously, that’s a bit different now. There are a couple of reasons why that approach has mostly gone out the window:

1. Episodic anime blogging is an extremely over-saturated medium. There are at least five blogs expressing any given opinion on any given show on any given week, with varying levels of prose. Most of them have existing followings. It’s not an efficient use of effort to take two years to try and build up a similar following to a commentator with a similar style, even if you do think you can write better.

2. I like to tinker around with spreadsheets. It’s just something I find fun. Too, looking at anime from different perspectives can lead to surprising insights on the medium itself that deepen my appreciation for just how much effort goes into it.

3. As a long-time worshipper at the churches of Neo Ranga and Futakoi Alternative, I’ve dealt with a lot of BS over the years to the effect of “it’s ridiculous to even say that show A is better than show B”. Beyond all the other neat things numbers can do, pretty much any metric available does a pretty good job of unsettling this debate. Some people use “number A is bigger than number B” arguments to assert that one show is better than another, but most numbers are actually telling a story of a world very far removed from such absolutes.

For example, take a look at these two myanimelist rating charts:** 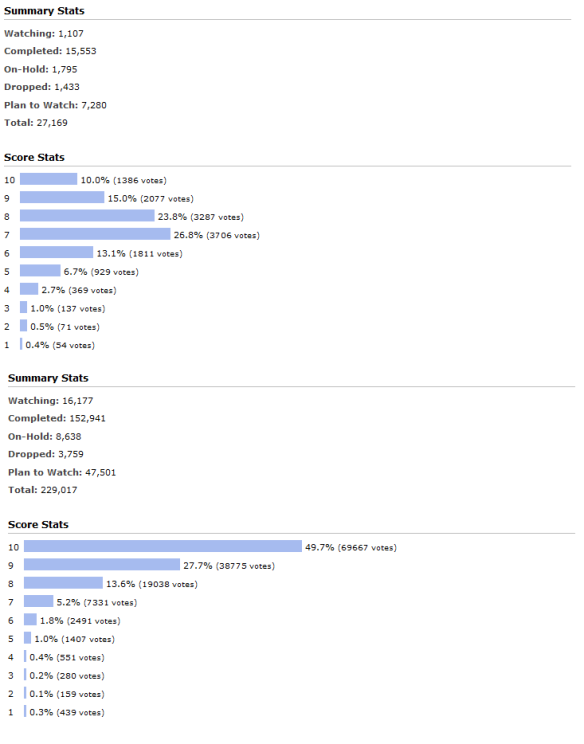 Side-by-side, pretty much any numbers-only comparison is going to find the show on the bottom is ‘better’. It’s got more 10/10s overall, more 10/10s by percentage, and more popularity, all by wide margins. But one thing that gets overlooked in just comparing those numbers is that you have a very finite number of people who think the show on the top is worth a perfect score. Even if half of them have seen both shows and 80% of those think the one on the bottom is better, that’s still 100+ people who would rep the one on the top. While that’s statistically a very small number, the important thing here is that there is a definite subset of people with that opinion.

The same thing applies to disk sales. Even in the cases of disappointing numbers all-stars like Gingitsune (594) and Kyousogiga (955 average), a number of people were willing to shell out for their disks; just not as large a number as for other, more successful shows. The entertainment industry is a democracy, but not everyone votes for the winner, and losing an election doesn’t mean that nobody voted for you. Even though some shows have fought their way to better numbers and more praise than other shows, that doesn’t mean that they’ve got a monopoly on positive public opinion (or even that all of the opinion is positive).

One of the accusations sometimes leveled against people who take a more numbers/industry centric approach is that they only do so because they like the shows that come out of this model. I can’t speak for everyone, but my top 3 TV anime were all commercial flops,*** and the above is the primary reason why I enjoy delving into them, and would even if they didn’t make a convincing case for the long-term legacy of my favorite critical whipping boy of a director. This is really just another fancy way of saying there’s no such thing as a stupid opinion or bad personal taste, and that a good/bad dichotomy is a pretty incomplete way of looking at anime.

*To be clear, some in-depth non-numerical stuff will eventually be here. I’ve got a couple of pieces on composers, manga storyboards, and the evolution of background art from 1980-2014 in varying stages of “wow, this is taking longer than I thought”.

**The one is from Steins Gate, the other is from Spiral. The former was picked because it was a non-sequel ranked in the top 5, the latter for no particular reason.

***Hajime no Ippo, Kaiji, and Futakoi Alternative, for reference.