Last week’s episode wrapped up a particularly fine retelling of an originally dull story arc. This week, it’s back to that massive cliffhanger Shishiou Igarashi left us with in episode 6. That’s right; it’s time to open… Pandora’s Box. … Anyway.

The opening fight between Hyoubu and Andy was very well-played. One one hand, Hyoubu’s smart, and he saw this betrayal coming a mile away. So of course he’s prepared to kill Andy with a method which does not directly use his psychic powers. On the other hand, Andy just needed to disable the brain powering the ship. So his actions were mainly aimed at distracting Hyoubu from that goal. Including throwing his gun, the first of 2 American superhero references this episode I caught.

We “met” the mastermind behind the events of the series this episode, in that we heard his voice and saw half his face below the nose. Not much to go by there; the only thing I do know for sure is that provoking Hyoubu by calling him a monster is a galactic miscalculation guaranteed to bite him in the ass later. 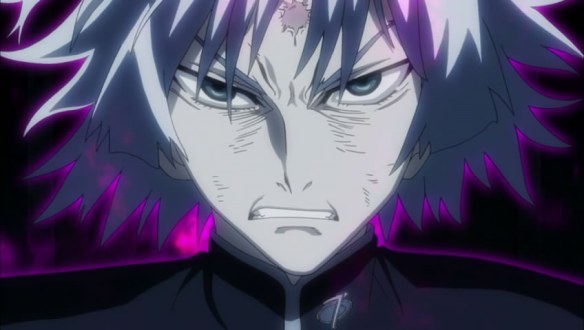 That freakout face will not be ignored

One theme this episode milked very effectively was one of children in peril. It’s hard to feel any sympathy for a faction that is grabbing children by the wrist and threatening them with guns and injections. My favorite of the many varieties of that type of scene that showed up this episode was the particularly electric one with Yuugiri hiding behind the stairs. The tension’s all there as the soldiers climb down, then they pass leaving her undiscovered, only to have Andy’s asshole boss find her (just as she sighs with relief, no less). Perfectly executed, that was. A close second goes to the scene which was playing off of X-2 with cuter kids, where Patty got her first lines in the anime .

I can’t end this post without a short bit on director Igarashi Shishou’s penchant to sometimes just make snazzy animation. That wasn’t the only thing he did this week; there was high-level direction of non-action scenes this episode (aforementioned scenes of children in peril), as well as scenes that made it more obvious to me that he uses stock effects a lot of the time (how many times have you seen a vertical explosion of lights used to avoid drawing an aerial battle?). Even so, everything else was solidly outshone by that fireworks display during the release at the end. That had to cost a lot of money, and looked like something Redline would’ve cut out to save time.

Maybe Blueline would be more accurate

3 Predictions Regarding the Final 3 Episodes:

1. Yuugiri will survive, while Andy will die a heroic death.
2. Hyoubu will get his shot at the main American bad guy, and will find a creative way to kill him.
3. Muscle Okama will not, in fact, show us what’s underneath his business suit.