If there’s an inverse situation to not seeing a sequel to something you liked that you know was really popular, it’s getting a sequel when you in no way expected one. Disc sales are a pretty good indicator of when something is commercially viable enough to get a second season, but they aren’t the only factor playing in. There are a couple of consistent ways that anime with non-profitable sales wind up with more than one season, and that’s what I’m looking at today. Examination of the ones that did sequel reveals a rather unsurprisingly grim prognosis for fans of old, poorly-selling shows hoping that they’ll get more.

END_OF_DOCUMENT_TOKEN_TO_BE_REPLACED

I thought it’d be a fun little exercise to try and pull out as many mangaka names as I could without relying on references. This is that list, written on lockdown mode and complete with the reasons why I remember them.

END_OF_DOCUMENT_TOKEN_TO_BE_REPLACED

On the plus side, this episode set up a couple of really interesting routes that the final episode could potentially take. On the minus side, the normally marquee action was a couple of settings downward on the smoothness slider.

END_OF_DOCUMENT_TOKEN_TO_BE_REPLACED

Last week’s episode wrapped up a particularly fine retelling of an originally dull story arc. This week, it’s back to that massive cliffhanger Shishiou Igarashi left us with in episode 6. That’s right; it’s time to open… Pandora’s Box. … Anyway.

END_OF_DOCUMENT_TOKEN_TO_BE_REPLACED

If you know anything at all about manga, you’ve probably heard the name Weekly Shonen Jump before. Armed to the teeth with megahits like One Piece, Naruto, Bleach, and Toriko, it stands undisputed atop the manga industry. But did you ever wonder how that dominance came to be, or why it’s been largely unchallenged for upwards of 20 years? Here’s a hint: it’s no accident.

END_OF_DOCUMENT_TOKEN_TO_BE_REPLACED

Let me start with full disclosure; I’m an unabashed fan of Zettai Karen Children, the manga. I have been since 3 years ago, when I got through the whole of it that existed (some 200 chapters at the time) in just under 2 days. I love the way it portrays slow growth of characters and a gradual shift in both the softness of Minamoto’s personality and a growing sense of responsibility of the kids. I love how it can do drama well and can return to good comedic storylines after said powerful dramatic moments. 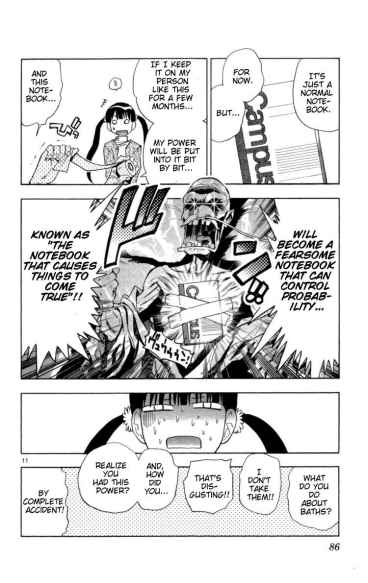 This immediately followed the series’ most dramatic arc

Let me also say that I abhorr the 2008 ZKC anime, because it’s a cheap imitation of Hayate the Combat Butler with little of the dramatic poise and persistent direction that makes the ZKC manga such a dynamic read.

So it should come as no surprise that I called shotgun on The Unlimited’s bandwagon as soon as I saw the promo art, premise, and the name of the director (in it was not the same one from 2008). It felt like the more dramatic side of the story would get a chance to see the light of day. I was worried about the fact that the director Shishiou Igarashi, had never helmed an anime before, but one could’ve done worse than Episode Direction of Deadman Wonderland as far as resume went. 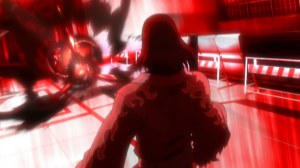 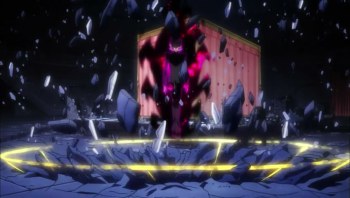 And this show immediately answered my expectations. In the first 2 minutes, we saw villain Hyoubu tearing through a military pursuit squad with nonchalance, taking down a helicopter with a popsicle stick after upending a tank squad. If nothing else, this show was going to establish itself with action. I really can’t emphasize how good the chase scene is for any sort of opening episode (more on that in a later article), and the fact that this director understood this flat out was a very good sign. As later episodes would show, this was not a misleading sign. Since that impressive first episode, we’ve gotten plenty of good action, some decent character development for anime original characters Andy and Yuugiri, and a retelling of one of the slower and less necessary manga arcs made more interesting than I expected.

The writer for the original 2008 season of the anime, Shinichi Inotsume, is still working on this season, and while his presence isn’t totally gone, it’s been reduced enough to be tolerable. The worst of the havoc he wrought was a not-very-funny Spelunker reference in episode 3. I appreciate that the director is handling body language and action scenes for the cast well enough to make the mediocre writing quality thankfully irrelevant.

I still enjoy the ZKC manga in its raw form, mixing comedic and dramatic arcs with a gradually advancing plot, the best. Still, if the 2008 anime was the forgets-what-made-the-original-good-comedy Fumoffu of the franchise, then the 2013 spinoff is proving to be a reasonable facsimile of TSR. More than anything, I look forward to seeing Igarashi’s name on more shows to come.