With the rare Shonen Junai Gumi/GTO-tier exception, the viewership of sequels follows a very solid rule of thumb; fewer people tend to watch the second season, and the ones who do tend to be ones who are generally in love with the franchise. But not everyone who loved season 1 of a given show will end up watching season 2. In real life, stuff like time constraints, stress, and other shows all serve as potential distractions from continuing to support a franchise. Though people who buy hard copies of a show are generally in that group of hardcore fans, they’re still human, and any number of factors could cause them to keep their cash in their wallets. If myanimelist rankings tend to overestimate the quality of a sequel, then sales might tend to underestimate its appeal.

So it’s worth asking the question; what percent of its sales does a typical show “lose” when it moves on to season 2? Since I already had a list of series that got sequels from 2005-2012 laying around from my work on the sequel probability equation, and most of those sequels have been at least partially made by now, it’s a fairly simple question (barring one wrinkle) to address.

END_OF_DOCUMENT_TOKEN_TO_BE_REPLACED

Ring in the new year with the raunchy sequel Seitokai Yakuindomo *! Unstoppable Hype Machine is already there!

Correction: Blood-C had a lower average (1577) than any of the series mentioned below, though its movie was announced in advance of the TV show.

So Tamako Market is getting a movie, and fairly soon (this April), at that. I’m nothing but excited at this news; of the shows that aired last winter, Tamako Market was probably my favorite. It had a colorful cast, a very nice soundtrack, and an adorably chubby, pompous bird. But the fact that it’s getting a continuation is a bit striking, in light of recent history.

The final average for Tamako Market’s per volume sales clocked in at about 3624, above the 3000 pvs benchmark but considerably below the sales levels of other franchises that got movies while averaging TV ratings of less than 3% (i.e. excluding Pretty Cure, One Piece/battle series in general, and Lupin III). From 2005-2012, the next lowest-selling series to get movies were Bodacious Space Pirates (7337), Hanasaku Iroha (8576), and Star Driver (9075). All the others sold in excess of 10,000 copies per volume. That’s a pretty huge gap – the next-lowest series in that group sold roughly twice as much!

So why is it getting a movie? I can think of at least two plausible explanations:

END_OF_DOCUMENT_TOKEN_TO_BE_REPLACED

Ever wonder what anime get sequels and what don’t? The simple answer to this fairly simple question is “sales, plus a few mitigating lesser factors”. We know this, beyond the obvious intuition, because over the years, we see those with robust sales totals get continued much more often than those with lackluster ones: 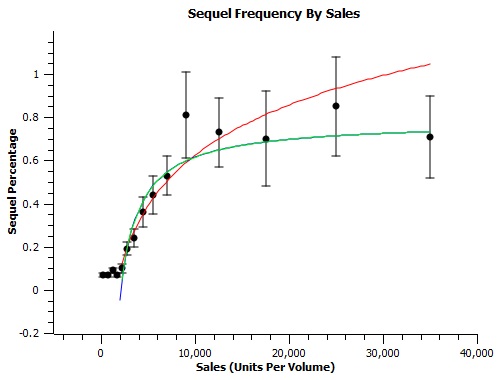 A more interesting question is perhaps this; which anime this year have the best chances of getting continued? After some delving into the subject, I can finally answer this question to a respectable degree of confidence. Based on data from 615 shows airing from from 2005-2012, the first season of an anime which sells x units per volume has P odds of getting a sequel, meaning either a second season or a movie.

END_OF_DOCUMENT_TOKEN_TO_BE_REPLACED

If there’s an inverse situation to not seeing a sequel to something you liked that you know was really popular, it’s getting a sequel when you in no way expected one. Disc sales are a pretty good indicator of when something is commercially viable enough to get a second season, but they aren’t the only factor playing in. There are a couple of consistent ways that anime with non-profitable sales wind up with more than one season, and that’s what I’m looking at today. Examination of the ones that did sequel reveals a rather unsurprisingly grim prognosis for fans of old, poorly-selling shows hoping that they’ll get more.

END_OF_DOCUMENT_TOKEN_TO_BE_REPLACED

There are few things more frustrating than loving an anime that has room to grow as a story, but never gets beyond one season of material. It’s arguably even more of an irritance when you know the second season would easily pay for itself. Fortunately, it’s very rare for popular anime to not get sequels (happens only about 20% of the time), and there are ways to predict which ones those will be. I like to think knowing softens the heartbreak.

END_OF_DOCUMENT_TOKEN_TO_BE_REPLACED

One of the many controversial features of sites like myanimelist and aniDB that allow users to list their anime is their inclusion of toplists. What’s the proper way to weight scores? Should sequels (which have an intrinsic advantage in 10-point averages) be counted normally? Is there a point to having one at all when it invites as much vitriol as it sometimes does?

Though actual discussions over topics like these tend to descend into unglorified hoopla fairly quickly, these toplists and rankings can be very interesting subjects for study. Especially if you dig a layer below the top and start to look at what they really measure.

END_OF_DOCUMENT_TOKEN_TO_BE_REPLACED

One statement I find almost as irritating as the ubiquitous “well, in the manga…” in anime discussions is the assertion that “_ gets better in the second season!” Now, sometimes this is actually true, but it’s important to understand that the act of making this statement implies a hefty bias.

END_OF_DOCUMENT_TOKEN_TO_BE_REPLACED

Please Teacher is a show memorable to me for sublime use of natural scenery and subtle characterization overcoming a really dumb plot. It’s also one of my all-time 50 favorite anime. So this show ostensibly has a sequel or some other big franchise project (if I were a betting man, I’d put most of my funds on “anime movie version”) on the way for its tenth anniversary. This is notwithstanding Ano Natsu de Matteru, the spiritual successor it got last January.

Am I excited about this news? Well, slightly. See, I’ve had a lot of bad experiences with my favorite anime getting sequels, and I’d really have to know more than what fictional universe it’s taking place in before I get excited.

Note: Since my tastes are somewhat idiosyncratic, and I’ll be talking mostly about shows I’ve seen and loved, feel free to disagree.