I’ve been slacking on my CotW features recently, and I apologize. There are 2 excuses I have. First, I’ve been busy, both getting the podcast running again and  Second, sometimes I just don’t end up reading a chapter of manga in a given week that makes me particularly passionate. I only read about 20-30 chapters of current stuff a week and generally have 1-3 marathon series on my back burner. Recently, I’ve been reading Part 5 of Jojo’s Bizarre Adventure and Takano Ichigo’s Orange. Both were good manga, and I might have more to say about them in the long run, but there wasn’t one point in either of them that jumped out as self-evident greatness.

But a win-obsessed former bottom-feeding baseball team led by a charismatic pitcher-owner winning the pennant by taking 3 games in a row, on the road, against the team that ultimately finished in second place? While spoiling their opponent’s victory party each time? That’s some fine stuff. 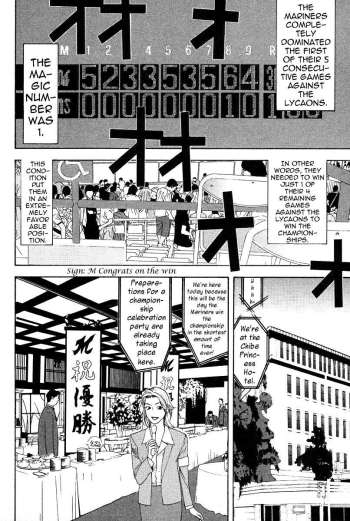 END_OF_DOCUMENT_TOKEN_TO_BE_REPLACED

Shinobu Kaitani’s One Outs, the story of ace player/owner of the Saitama Lycaons, Tokuchi Toua, is without question the best in an increasingly long list of baseball series I have read to date. It’s set in a professional level, and much like Giant Killing, it features everything that makes pro sports so interesting; contract disputes, arcs of victory and defeat over a long season, and players who are all at least nominally in the top 5% talent-wise (even if the Central and Pacific Leagues are kind of a few miles below the AL and NL). The difference between the two is that where Giant Killing chooses to attack pro sports with realism, One Outs chooses  to fight with showmanship. Toua forgoes all the traditional principles of baseball, getting opponents out at a historic rate with only a slowball/slider and a heaping helping of quick wit in his arsenal. Eventually, a combination of his dominance on the plate and his harsh but performance-based contract makes him filthy rich, and puts him in position to buy out the team his contract bankrupted. And that’s where the real fun, him leading his lackluster team to the pennant, starts. The chapter in question is a part of the Lycaons’ quest for the pennant, as they duke it out with a hilariously top-heavy first-place Mariners team.

END_OF_DOCUMENT_TOKEN_TO_BE_REPLACED

I thought it’d be a fun little exercise to try and pull out as many mangaka names as I could without relying on references. This is that list, written on lockdown mode and complete with the reasons why I remember them.