In an ending that was typical of everything the show has done prior till now, we got excessive combat, Shakespeare quotations, and plenty of toying with expectations. It’s been a heck of a ride for a show I almost quit on 4 months ago.

The plan the heroes had went off pretty much without a hitch, and they won the day. The finale stood out a bit from the rest of the show because of the lack of real twists pulled in this episode. Aside from Hanemura getting all Shakespeare-quotey (I wonder if that’s a mage of exodus job requirement?) and pulling out the giant sword, pretty much the entire episode was devoted to by-the-book wrapups of individual character arcs. It’s the smart way to go, for two reasons. First, it’s hard to give a series the ending it deserves when, with a short 20 minutes remaining, you pull a Penguindrum and introduce wholly new content which itself needs wrap time. Second, the contents of Aika’s final message were a worthwhile way to bring her part of the story to a close; it gives Yoshino and Mahiro a much more definitive resolution. 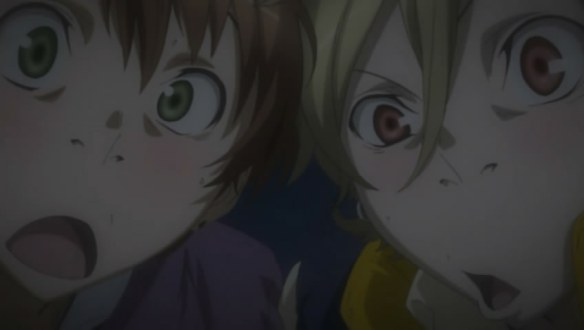 Yoshino’s non-death was one of the more surprising moments of this episode, given the cliffhanger that ended the last one. Still, it wasn’t nearly as terribly surprising as some other moments in the series. This show has been pretty carefree and apt to tease viewers’ expectations with plenty of things that don’t come to pass, so I’ve sort of adjusted to that at this point. While his death could have been a shot in the arm to really fire up what was a very straight-shooting ending, it’s something I’m willing to bite the bullet on without much fuss. 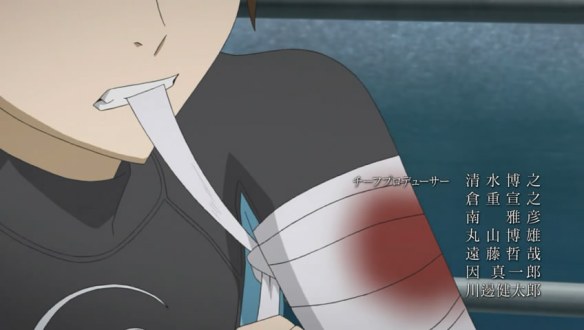 Plus, the kid still has a disarming personality

The ending wasn’t the kind of thing that would break a tie if I was still unsure about how to rate this show. Fortunately, I didn’t really need one. The near-seamless genre transitions from action-adventure to mindgames to romantic comedy with the fate of the world on the line is something I can’t take away from this show, the handling has been first-rate, and the diverse cast has been fascinating in a number of ways.

Overall Record: 2/9, or about half as good as a coin flip

Soundtrack: 2/2 (Classical-style soundtrack goes well with the loose Shkespearian themeing of the show, and it works even in parts you’d think it wouldn’t)

Writing: 3/3 (An excellent job done by Mari Okada throughout of managing expectations at various points in the series, keeping the truth cloaked in fog. She also built up a very likable cast.)

Direction: 3/4 (Masahiro Ando did a very job of tying disparate elements of the show together, and also was able to deliver snappy action scenes at bargain prices.)

Overall: 9/10 (Far from perfect, but does very cool things that’ll be worth talking about 5 years down the line.)