This week’s episode yielded a number of enlightening gems regarding Vincent Bold’s worldview. The most amusing of which is that he’s anti-Webb, but his animosity towards other groups which work on different aspects of space exploration is something not at all uncommon in the astronomical community. Fortunately, Mutta was there to remind him that we’re all really on the same team. And keep the entire episode from being just a (great) October Sky homage.

From the moment they obscured the third man in Pico and Vince’s childhood grouping, I was fairly sure we were looking at an important character. Right now, he seems more like the kind of guy who’ll be the tragic failure of the group, or at least the one not involved in space travel. That aside, Kid Vince, with the same disposition as his older self but less control over his body language, was great fun to watch. Like, when he was in admiration of group member #3/Rick, you saw his eyes get ever-so-slightly wider, a fact the camera focus helps the audience pick up on. And when he was getting lectured by the overly discouraging teacher, his downcast eyes were equally telling.

Nothing like childlike wonder to complete a humanization process

Young Vince makes for a great contrast with adult Mutta, whom Vince failed to shock despite his best efforts. Thanks be to Deniel Young. It’s a good thing Mutta’s misperception regarding his own lack of luck is starting to clear up, because he’s been getting happy coincidences on a silver platter since day one. Not to say he hasn’t also earned them; that “I’m my own worst enemy” speech was killer. 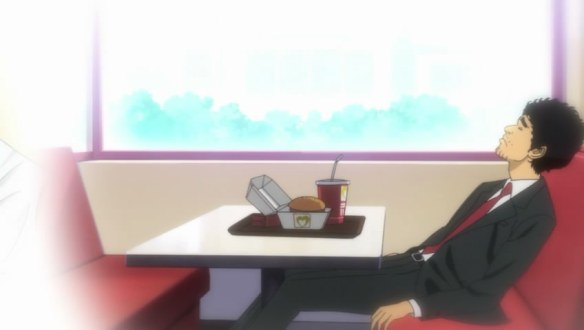 Brian Jay’s continuing to be a posthumous badass might as well be one of the best plotlines in anime. The main plot continues to be engaging despite, or perhaps because of, the most obvious film references (they even mentioned Homer Hickam by name!) since Mutta and Serika reenacted The Right Stuff. Maybe I’m just biased because October Sky is one of the 10 best movies ever made… Nah.