It stands to reason that immortal beings have explored every known way in the universe to have fun, legal or not. I’m really enjoying both the scenes of the myths and legends in their own world and the scenes where Takuro gets a glimpse into it, both of which were prominently on display this week.

A lot of this episode was just “how far can we go?” novelty-type humor, particularly the mushroom party and the cucumber handjobs. The high-energy mode of the show definitely lends itself to gags of that type, but I feel it’s notable that those scenes were largely carried by their characters and energy level, rather than the cleverness of the script.

Many Mushdrakes were harmed in the making of this picture

The keener comedy of the episode came from the scene where Takuro and the Kappa were just talking. Trying to talk, more accurately. The awkward silences they shared were perfectly punctuated with that flurry of words that comes out in those situations when both people don’t know what to say end up grasping for straws to find a conversation topic. This down-to-earth flavor was something that contrasted very pleasantly with the general weirdness of the show; it kinda felt like guzzling water after finishing a bucket of hot wings. 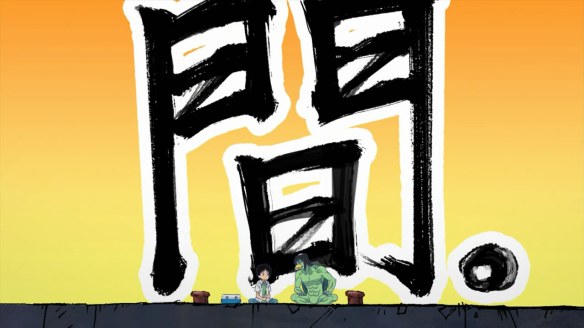 Not that the energy level hurt here either

I feel like director Tatsuya Yoshihara really lucked out in finding an open quarter-hour slot alongside Azazel-san Z this season. Ten minutes of explosions is just about right, twenty minutes is really pushing it; full episodes of Muromi-san would get to the point of requiring a much more delicate balancing act than I believe he’s capable of. As it stands, though, the show’s found a niche and is taking to it like a fish to water.