In our ongoing maximum freestyle segment, Drew and Sam tackle one of the most zeitgeisty anime movies of the eighties, the nuclear-high-energy Project A-ko. 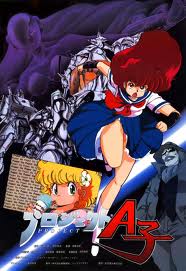 Drew: If there’s one thing that really geeks me out, it’s talking about really complex storylines and history that certain anime have. It’s one of the only ways to make Fractale entertaining, certainly. Project A-ko was one I knew had quite a few items of interest swirling about it going in, between being an ex-hentai Cream Lemon title and something basically everyone who knew anime in the late eighties had seen. After watching it, it’s not hard to see why; mechs, teased yuri moments, and spiffily smooth animation were three of the biggest things anime was known for at the time, and this movie has all of the above.

Sam: Do you like slow plotlines? Deep plots? Discussions? Then get out, we’re talking about Project A-Ko. Project A-Ko is, put simply, one of the most energetic things I have ever seen. EVERY scene has multiple things going on, little background gags, multiple parodies, and great jokes. The plot is that A-ko and C-ko are two girls who go to the same school. They are good friends, but B-ko, another girl wants C-ko all to herself, so she uses many tricks to get A-ko out of the picture. There is also the story of an alien princess in there, complete with Captain Harlock parody captain.

Drew: …Who is not-so-secretly female. B-ko’s machinations are pretty fun, as she builds increasingly elaborate and powerful mecha that last about as long as every villain One Punch Man has ever gone up against once she sics them on A-ko. But for me some of the best gags were the ones when you realized that all the aliens trying to reclaim their princess (one of two major surprises in the plot) are all female, but talk like men. Normally, this wouldn’t be too much of a surprise (bent genders in anime=/=shock), but they set you up for it early, by having a brawny Kenshiro-bodied delinquent girl with the voice of a small child, showing she was actually female. Great comedy all around, and it’s matched by the sort of timelessly great animation that makes you feel extremely sorry for the hand of the guy who had to draw the pulverized roads behind A-ko when she ran to school. This work just screams fun, like a spider monkey pole-dancing while wearing a Zoot Suit.

Sam: The entire work is as random and zany as that analogy. The big thing that separates Project A-Ko from the rest of the pack, though, is the way that the comedy is done. NOTHING is taken for granted and everything is destroyed, taken inside-out, and just generally messed with. I think the greatest example of this would be the brawny Kenshiro girl, Mari. The idea of the character has been done before (character is too manly for what she is), but its in the details. most of the time, the voice of the character is how they look; with Mari, however, her angry voice is manly, but her normal voice is very girly. Let me tell you, when you see a manly mo-fo open up his mouth before beating up a character and hear the voice of an 8-year old girl come out, its comedic gold. Thats pretty much the standard of all the jokes; really zany but also really thought out. I think the best comparison movie is Airplane.

Drew: I think the Airplane comparison holds up pretty well in terms of comedy, but one thing Airplane lacked was a triple-A sfx budget. I mentioned the pulverized-roads bit before, but some of the action in this show has to be seen to be believed. It’s not like it’s the best animation ever done, but it’s certainly great, and punctuates the general zany feeling with a bit of adrenaline. 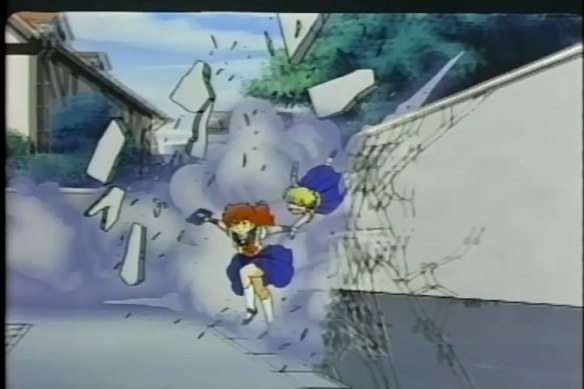 Sam: This is a movie that I went into thinking I would like, and ended up loving. Its energy and hilarity make it one of the best anime movies I have (in my limited experience) ever seen. 10/10

Drew: Project A-ko is a movie that reminds me of why anime got started in America, and consequentially why I’m trying to go back and watch some older classics like original Gundam and Hokuto no Ken. By itself, it stands up strong and tall. 9/10

Thanks for reading, see you next time!