Saturday’ slate of new anime concludes with two slice-of-lifey shows, albeit with one much more anticipated than the other.

The Monogatari series is pretty much a known quantity at this point. It’s visually impressive and slick, the dialogue is intelligent, and the soundtrack is all kinds of good atmospheric. I’m disappointed that this season’s going to continue spending time on one of its weaker characters again*, but the first episode was a smooth ride and I’ll be following this straight through unless something exceedingly ridiculous and out-of-character happens to the story. 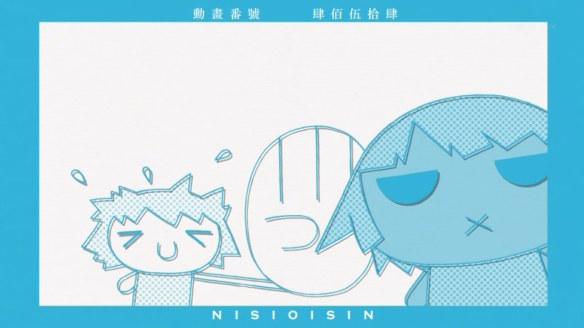 Golden Mosaic opened with a well-spoken English line, a rarity in Japanese voice tracks. That was attention grabbing, and the soundtrack and camera pan-out in the pre-OP section did a good job setting me up in the shoes of an exchange student facing the exciting unknown. The detail in the settings throughout basically screamed “we had a research trip to this location” louder than anything since at least the temples in Tenchi in Love. I mean that in a good way; I love background detail and feeling like care was poured into the setting. The quality of spoken English got worse as the episode wore on, but I give the staff credit for using the different languages to emphasize the two main characters overcoming their communication barrier. Between all that slick execution and a wonderfully whimsy soundtrack, I definitely see myself watching at least 3 more episodes of this one.

They even nailed the abundance of sheep

*We’re up to what, ten episodes with Tsubasa in the title now?

1 thought on “Sell Me in 20 Minutes: Monogatari Series Season 2 and Golden Mosaic”