With this Friday’s two new shows (and the only full-length Friday shows on the season), the flow of first episodes for this summer season has come to a close. Fortunately, the day went 1 for 2, and added another show to the slate of things I’m gladly continuing.

Hyperdimension Neptunia was the latest work from the illustrious David Production, aka the post-Gonzo Gonzo.That’s promising, but nobody carries an undefeated record forever.* So I stepped into the world of Neptunia with a mix of anticipation and caution. This episode was a slow starter, taking its time introducing the thinly-veiled software parody world. It was fun to watch the cast just play around, but the character drama was generic both in content and portrayal, and the action was lazy. Also turning me off was the slime molestation scene that fell into the gap of being neither subtle nor blatantly self-aware. There’s not enough potential in this one to give it another episode. Dropped. 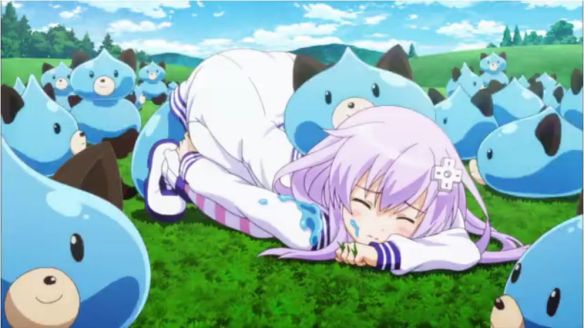 Gatcha Gatcha Man Crowds stood out over the course of the episode for 2 artstyle choices; the Tiger and Bunny-style CG fights, and the wisp-thin outlines tracing the characters. Both made a positive impression on me, and weren’t intrusive in the way that alternative artstyle choices sometimes are. The characters were a lot of fun, especially the not-panda and the lead female. Thanks to their chemistry, even the terminology-dumping monologues were an engaging watch. I love where this show is going, and it’s earned 3 more episodes of my time this season. 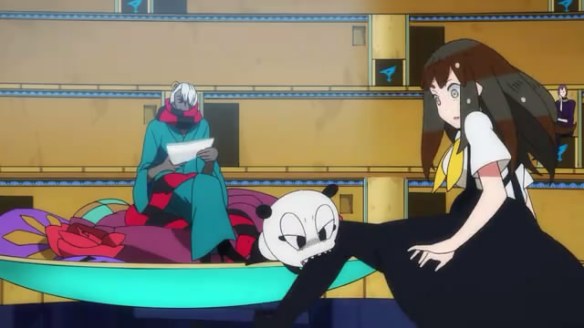 1 thought on “Sell Me in 20 Minutes: Hyperdimension Neptunia and Gatchaman Crowds”