Sam: For a series based on a show from the 70s, this has been one of the most weird, newest, and most awesome series of this season.

Drew: I think that’s one of the strongest cases for franchise reboots. They have the security that name recognition will bring eyeballs their way no matter what, but they also have freedom to do a lot of things their own way. Which is historically an environment Kenji Nakamura has excelled in. I’m not sure whether what’s more fascinating at this point is the characters or how ominous GALAX, the social networking platform posing as a savior of the world, is.

Will: This is probably my favorite show of the season. Everything about it just really works together for me; the art, music, and writing all blend together in a perfect way that I only see in my favorite series. Or, it’s the fact that everything works together that makes those my favorite series. I had no real expectations for this going in, I knew almost nothing about it, so how great it is really a big surprise for me. Actually discussing the episode though, GALAX makes me a bit worried; my knowledge of cyberpunk tells me that no massive network that everyone loves will be a good thing forever. When do you think it’ll turn out to be an evil that could have been prevented by engineers actually doing what they were taught?

Sam: I think within this series, although part of the reason GALAX is so interesting is that so far it has shown how it is useful; the way that it allows people to interact, helps solve problems, and its usability all make it seem like a good network, steps above other media that have their own social network that all became popular because “social media is weird”. I actually would kind of like to see GALAX in reality, which makes the way they set up it as a possible bad thing in the future all the more ominous and creepy. 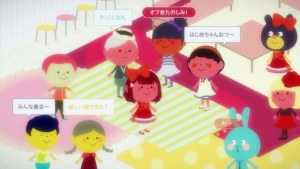 Drew: Based on flow, I think we’ll start to see very straightforward indications of ways GALAX can go wrong in episode 4, with a straight-up reveal coming in episode 7 or 8. I can already foresee some of the possibilities. For example, what if someone were to use it to organize a lynch mob and accuse one of the heroes of being a criminal, and then they get beat up before help can come. Or die, since death is by no means out of the equation in a Kenji Nakamura series. That’s why I’m particularly interested in Hajime’s character. She’s a Gatchaman, but also one of the bigger promoters of GALAX, so if crap hits the fan, she’ll probably end up more shocked than the others. Her character, which is super-fun, might also be heavily influenced by that social networking dynamic.

Will: Yeah and that just makes me think of how much I really like all of these characters so far. It’s fun to just watch all of them, man, they’re all cool. I love this series for reals. But again with GALAX, its Chekov’s gun; they wouldn’t have brought it up this much in the episode if something wasn’t going to happen with it. At least, I have enough faith in the writers that they wouldn’t bring it up this much if it were just a passive part of the world.

Sam: The thing is that I would actually find it cool if it was just a passive part of the world, as it really fleshes the world out and brings up some cool possibilities. That being said, I doubt that it would just be a passive part of the world, but so far it looks awesome. This entire show is so weird, so off kilter, but it uses that to its advantage to such a degree that you want to see every show be like this. What do you guys think?

Drew: Weirdness and oddball is a non-issue for me. It’s just always a case of whether or not the characters work, and in this case it’s a solid yes. People make too big a deal of non-conventional approaches, when being non-conventional isn’t what makes shows work.

Will: The “weirdness” of it is what really makes me love it. My favorite anime is Utena, so I’m all for things being weird. I really, really like non-conventional art, but I do know that that isn’t what makes it good.  I think it’s just that the more creative people are more likely to work together and take more chances together. I don’t know, I just really like Gatchaman Crowds, and the art is one of my favorite parts. The music is good too; really helped the scene each time in this episode from what I heard. The best part is that it actually meshes well with the art to create a much more cohesive and like Sam said, kind of “off-kilter” universe, especially the part in the Gatchaman base, or whatever it’s called. Man, I like this show too damn much. 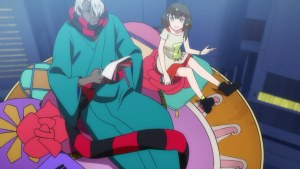 Sam: The weirdness of anime is part of the reason I love it. Gatchaman Crowds is one of the best reasons why I love weirder shows and approaches, as it uses all its different ideas to create a great, unique experience. I love the character designs, Paiman being my favorite, and it uses them for a really great world. I am really excited for the rest of this show, to lengths that I don’t know how to articulate. This show is cool, fun, weird, artistic, nostalgic, new, derivative, and original all at once, adding up to one of the best experiences you will have this season.