WataMote doesn’t really have a consistent sense of episode structure in a way that some comedies do. Contrary to last week’s, where the rain and the cold bits split the episode, this week’s show ran through a series of 3 skits. The underwear one invoked some legitimate pity, and had a fairly touching conclusion.* However, the others (the nightmare and the molestation one) were based around karmic payback for Tomoko’s stupidity. All of which was accompanied by the series’ typical visual panache and some nigh-flawless transitions.

This was the first week that really gave me cause to recognize WataMote’s soundtrack, which brought out a weird, vaguely surreal-sounding gear to compliment the scene where Tomoko was getting delusional in front of a mirror. That track brought out dissonance and managed to fit the scene to a T. The music after Tomoko figured out the thing “groping” her was a naginata handle really slammed home the sense of exaggerated disappointment gripping her at that juncture. It’s very wrapped up in the sense of being just slightly overdramatic. 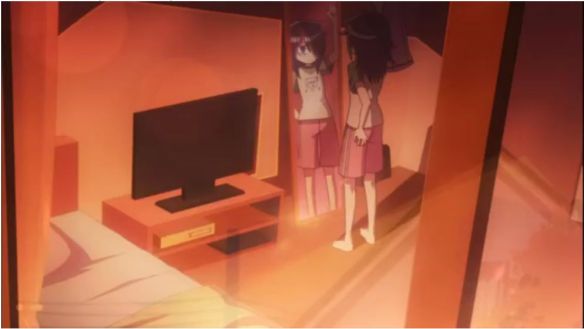 Oonuma Shin, meanwhile, was channeling a lot more of the him that directed BakaTest this week. There were the arrows, the crazy maximum-zoom shots, the odd focus on the grip rings on the train, and the scene transitions that occurred while the camera was focused on Tomoko’s face. All in keeping with little things, not becoming the focus of the scene but just providing some very elegant window dressing. Nowhere was that window dressing more literal than during the aspect ratio joke.

The best word I have to describe WataMote as a complete package at this point is “smart”. While definitely creative, it’s not doing anything visually forefront enough to be called innovative or clever. On the flipside, its not intrusive and makes what should be a cringe-worthy plot very easy to watch straight through. The script, though not always low-key, is producing some Astro Fighter Sunred-tier deliciously awkward moments. The show in general feels a bit more subtle than zanier anime comedies (like Gintama and SZS), despite its oddball protagonist. This sense of subtlety may have something to do with the fact that there is no straight man in the show most of the time, so the best jokes sometimes stand on the awkward silence rather than the shocked tone of the retort. Neither style is better, but anime definitely sees less of the former than the latter.

*It says something about the general state of parenting in anime that Tomoko’s dad instantly jumped into the top 20% just from that one scene he appeared in.