Last week set up for a massive, large-scale confrontation between Arata and Kadowaki as an ostensible climax of the show. However, Arata had just entered an entirely separate hostile territory (the water god’s) at the time, so this confrontation was undoubtedly still several episo-

For emphasis, I’ll repeat what’s been a mantra of mine while blogging this show. These villains are really, really solid. The latest example? Kadowaki’s bullying personality wasn’t simply waxed by one defeat. No, if anything, getting cold-cocked by other-Arata only made him more brutal and bent on tearing Arata’s psyche apart. His speech in the opening minutes did a bang-up job of showing off the anger, disdain, and malice he felt towards Arata. 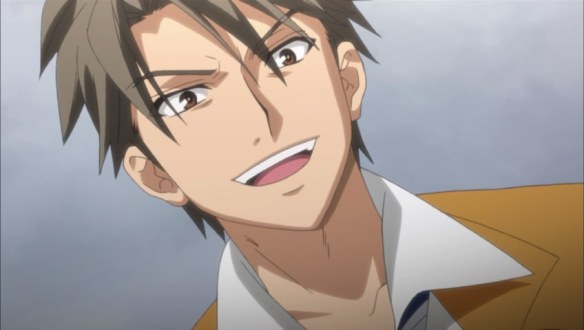 Ditto with his facial expression

Oh, and that’s just Kadowaki in the opening minutes. When Arata snapped back? I was freaking out at just how much sense it made. Arata’s finally rebuilt some confidence now, and he’s not just going to do nothing. It’s really refreshing, especially after reading Life, to watch a bully take first blood.

Oh yeah, in case you forgot Kannagi was in it for the sword…

That took all of 8 seconds. Tsukuyo had yet to come to rest on the ground before Kannagi snatched it up. Man, do selfish characters make for great TV. Do they ever. And this even led to some almost-moments from Kanate, the party’s Mr. Bland, as he was the only one left to go after Kannagi. Even if he gave it back later after realizing he couldn’t handle it, that temporary flash of pure opportunism created a moment I won’t soon forget.

Kadowaki’s comment that Arata wasn’t taking him seriously was the first clue that their current relationship came from something a bit more complicated than jealousy. The revelation that the track scene that’s been replaying from throughout the show actually featured Kadowaki winning because of [what he thought was] Arata holding back on him. His response is still very disproportionate, but it makes him into a character who makes a bit more sense and hits a lot closer to home.

Really, this episode was just one long highlight reel of the characters I’ve liked the most (Arata, Kadowaki, Kotoha, Kanagi) being themselves in the way that makes them maximally interesting to watch. I’ve had this show sitting pretty solidly between an 8 and a 7 based on the lack of pizazz it’s sometimes had, but it’s gunning for a 9 right now, and it just might get it if it keeps playing F-zero with the plot.